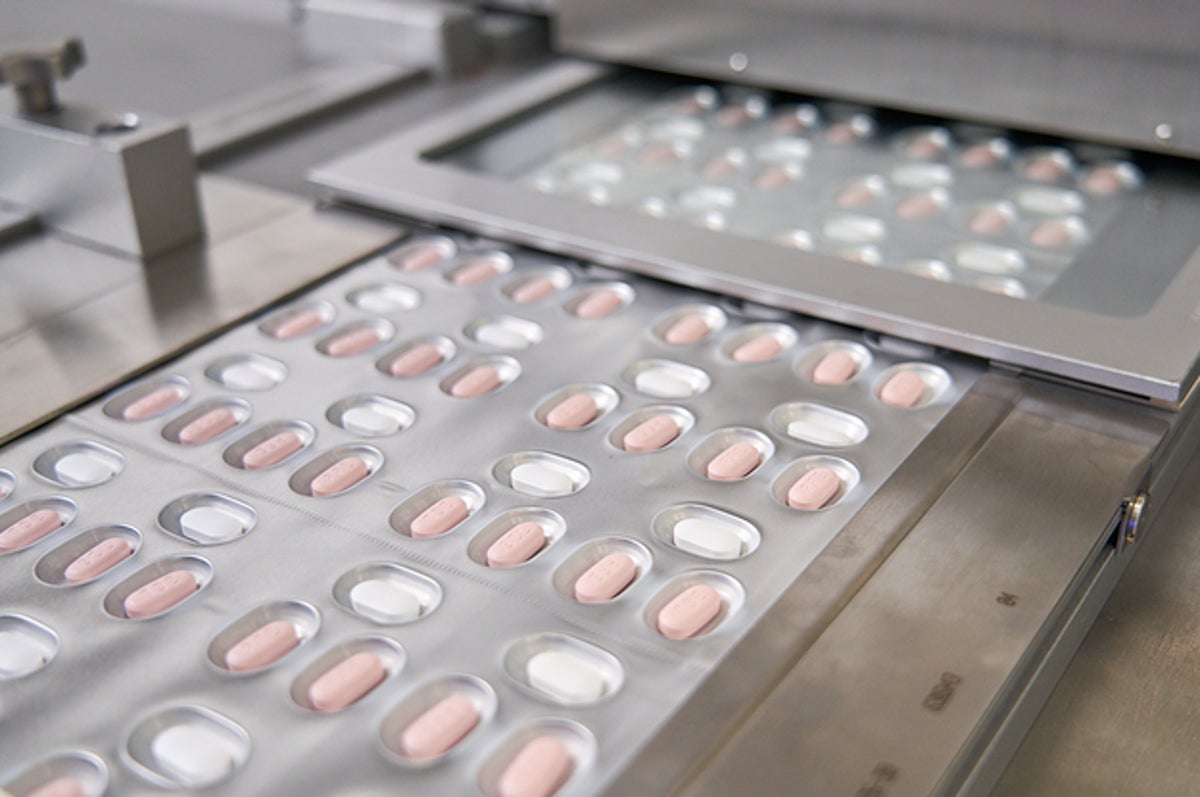 While there is now a safe and effective COVID-19 vaccine for people 5 years of age or older, treatments are still desperately needed for the millions of people who continue to get sick.

A major goal has been to get effective COVID treatment as simple as taking a pill. Now, finally, there are nearly new oral medications for COVID-19.

The FDA will decide on Nov. 30 whether Merck will receive emergency clearance for a COVID pill called molnupiravir. Pfizer has also filed with the FDA for emergency use approval for a second antiviral pill to be marketed under the brand name Paxlovid. Clinical trials for the two drugs claim that the risk of hospitalization or death from COVID is reduced by 50% to 89% if taken shortly after symptoms start.

If the real-world results are as good as the clinical trials (they aren’t always), these pills could be a real game changer when it comes to protecting against hospitalization and death from the respiratory virus.

Since the start of the pandemic, experts around the world have been desperate for effective treatments for COVID. Some that initially looked promising, or at least received a lot of attention, turned out to be a failure (see ivermectin and hydroxychloroquine).

Others — such as the currently available monoclonal antibody treatments and the antiviral drug remdesivir (sold as Vekury) — are effective under specific circumstances. However, they must be administered by intravenous infusion or injection by a health professional, usually in a hospital.

“They weren’t things that were widely available to the general public,” said Dr. Tim Sheahan, a virologist at the University of North Carolina’s Gillings School of Global Public Health who did preclinical work with both molnupiravir and remdesivir. “So I think that’s why these oral antivirals are getting a lot of attention.”

The drugs are likely to be available on prescription at your local pharmacy, and “everyone knows how to take a pill,” he said.

Here’s what else you need to know about these new treatments for COVID.

Both antiviral pills look promising when it comes to fighting COVID. While drugs don’t always perform as well in the real world as they do in clinical trials, both trials were stopped early because the benefit was obvious.

A clinical trial of molnupiravir in which 1,500 people would participate was stopped prematurely because the risk of hospitalization or death in people taking the drug was reduced by 50%, compared with placebo.

In a clinical trial of Paxlovid, the drug reduced the risk of hospitalization or death by 89%. In that study, about 3,000 people with mild to moderate symptoms and at least one risk factor for developing serious disease were thought to take the drug or a placebo, but the study was stopped early because it was so clearly effective.

“People want answers, people want to feel safe, and I think people have definitely gotten into a dead end in recent years,” Sheahan said. “But the data produced for the Pfizer drug and molnupirivir is really good everywhere.”

the drugs work in different ways.

There are three basic ways that drugs can interfere with the SARS-CoV-2 virus’s ability to hijack the cells in your body and produce more of the virus.

Molnupirivir and remdesivir are polymerase or RNA replicase inhibitors, which prevent the cell from creating viral genetic code, Sheahan said.

“If you stop the virus from making viral RNA, that’s really bad for the virus,” Sheahan said. “It’s an essential part of virus replication — if you can’t make new RNA, you can’t make offspring or progeny virus.”

The third type of drug, entry inhibitors, prevents the virus from attaching to cells in your body in the first place, similar to the way monoclonal antibodies block the virus, Sheahan said.

“I think the other two classes of drugs will have a bigger impact than an entry inhibitor, but if you put them all together, maybe that would be good,” he said.

It’s a lot of pills, taken about a period of five days.

Although both drugs come in pill form, molnupiravir is a capsule and Paxlovid doses contain two different tablets. (What’s the difference? In general, tablets can be halved, capsules cannot.)

For molnupiravir, the clinical study involved taking four capsules twice a day for five days, or a total of 40 capsules.

In the clinical trial of Paxlovid, patients took the drug every 12 hours for five days. That included four tablets of PF-07321332 and two ritonavir tablets per day, for a total of 30 pills.

Ritonavir is taken “at a low dose to slow the metabolism or breakdown of PF-07321332 so that it remains active in the body for a longer period of time at higher concentrations to help fight the virus,” said a Pfizer spokesperson. in an email.

You take them in three five days after the onset of symptoms.

Like other antivirals, such as Tamiflu for the flu, the sooner you start taking them, the more effective they will be at preventing you from becoming seriously ill.

“These types of drugs do their best when taken as early as possible after symptoms start,” Sheahan said.

In both clinical studies, the volunteers had mild to moderate COVID symptoms, tested positive for the virus, and had at least one risk factor that increased their chance of developing severe symptoms that could lead to hospitalization or death.

For example, in the clinical trial of molnupiravir, about 13% of people were older than 60, 76% were obese, 13% had diabetes, and 10% had severe heart disease.

“Their ability to shorten the duration of your illness and avoid going to the hospital and avoid dying will diminish over time,” Sheahan said.

The side effects seem are relatively low.

In both clinical studies, side effects in the treatment group were similar to those in the placebo group.

“It doesn’t seem like they had any serious side effects,” says Dr. Waleed Javaid, an epidemiologist and director of Infection Prevention and Control at Mount Sinai Downtown. While more is known about the side effects of protease inhibitors, “most common side effects are very mild in most cases and go away quickly,” he said.

The FDA has yet to decide who should take the pills and when. It is a good idea to follow these recommendations when they are made. For example, they can only be approved if you test positive for COVID and are at high risk for complications. In that case, you should avoid them “just in case” or as a preventive measure.

For any drug, it’s important to make sure the benefits outweigh the risks, Javaid said.

Once approved, they should be generally available.

Once the drugs get the green light from the FDA, the companies say they will produce millions of doses.

Merck announced it will make 10 million courses of the drug by the end of 2021, and the US has already agreed to buy 3.1 million of them for about $2.2 billion.

“The US government also has the option to purchase more than 2 million additional courses through further options that remain in the contract,” a Merck spokesperson said.

The US plans to buy 10 million courses of Paxlovid from Pfizer for $5.3 billion, according to a deal announced last week.

While it’s not yet clear how much the drugs will cost the average consumer (or their health insurance plan, if they have one), the US government is paying about $700 per course for molnupiravir and $530 per course for Paxlovid.

A Merck spokesperson said that in the US, “the government will make molnupiravir available to patients for free, and we believe it will be available at little to no cost to most other countries that have a supply agreement with our company.”

Merck signed an agreement with a nonprofit in October that would allow companies in more than 100 countries, primarily in Asia and Africa, to license molnupiravir. In April, the company signed licensing agreements with manufacturers in India to produce generic molnupiravir.

Pfizer has struck a similar deal, allowing a United Nations-backed nonprofit to sublicense the drug, making it available in 95 countries.

That means millions of people in low- or middle-income countries can get the drugs at a much lower cost.

One day, a cocktail of drugs could be used to fight COVID.

People with other viral infections such as HIV and hepatitis C are treated with a variety of antiviral medications, Sheahan said.

Having multiple drugs that use different mechanisms to stop SARS-CoV-2 could be helpful that way, although much more research is needed to show that’s true.

“Two drugs that act in different ways when used together can not only be additive, but it can also be synergistic in the ability to reduce replication, but it will also create an environment that is much less likely to generate resistance than monotherapy.” said Shahan.

You shouldn’t skip vaccines because they are available – seriously.

All the experts we spoke to strongly agreed. These pills are not an excuse to skip vaccinations.

“While antivirals show promise, we need to make sure our population is vaccinated,” Fauci, director of the National Institute of Allergy and Infectious Diseases, said at a news conference. “Antivirals, as good as they are, are not our first line of defense against COVID-19.”

“Drugs like these are very encouraging, they are very helpful, but these are not going to be the answer,” Javaid said. “Get vaccinated, that’s the answer.”