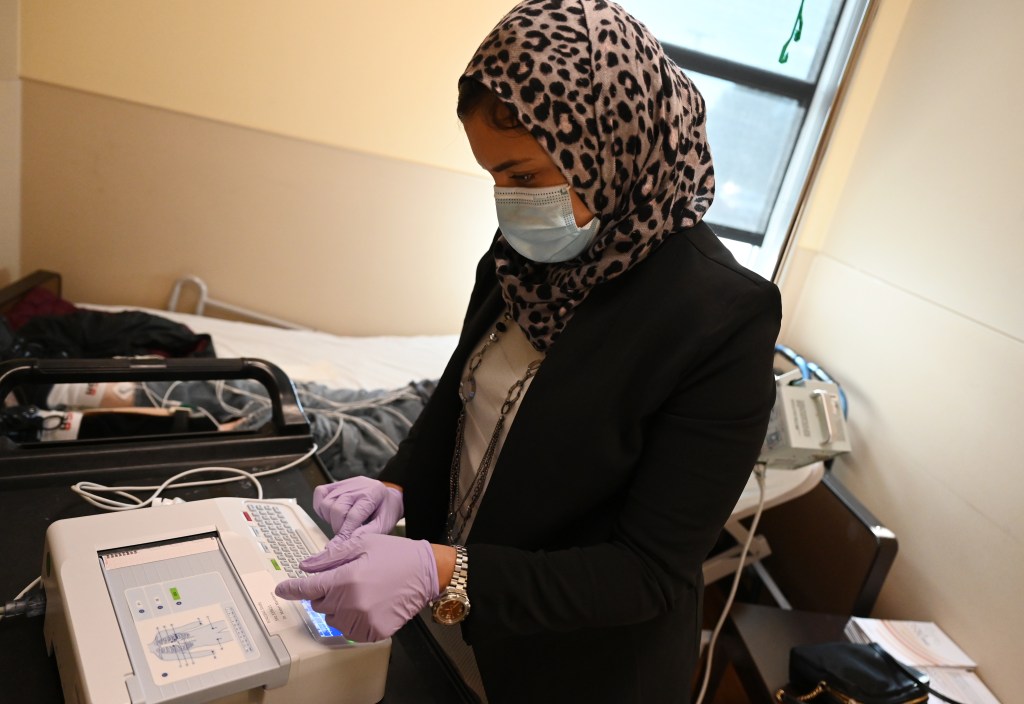 Three years ago, after multiple visits to the emergency room and her OBGYN office, a patient with severe pain and no diagnosis sought Wafa Elejmi for advice.

Elejmi, who worked as a clinical researcher in Denver, was not a practicing physician in Colorado but had OBGYN residency experience after graduating from medical school in Libya. Someone who knew the patient had advised her to contact Elejmi when she was at her wits end.

After 10 minutes of listening to the patient talk about her symptoms – vaginal bleeding and hemorrhagic cysts in her pelvis, pain and insomnia – Elejmi gave her opinion: the patient had an incomplete bilateral oophorectomy. In fact, she still had ovarian tissue in her body, despite her ovaries having been removed at least a year earlier, and it was causing problems with the hormone replacement therapy she was receiving. The patient and three other doctors who watched her ultrasound had to intercede before confirming what Elejmi had told her.

“We are trained to use our knowledge and skills more than just relying on machines,” said Elejmi. “That’s one strength we can bring to this healthcare system, which is accurate diagnosis. Then machines can confirm our diagnosis and not the other way around.”

Although Elejmi was born in Greeley, she spent most of her life in Libya, minus a few years in the UK, so she continued her medical training there, before returning to Colorado in November 2007. She was unprepared for the hurdles she would face as an international medical graduate attempting to practice medicine in the state — not only is the process lengthy and costly, but it requires these graduates (from approved schools) to complete three years of postgraduate clinical complete education in the state to become licensed to practice, compete for restricted residences. Graduates in the US only need to complete one year.

Earlier this year, Colorado Democratic lawmakers asked the Nurse-Physician Advisory Task Force for Colorado Health Care within the Colorado Department of Regulatory Agencies to make recommendations to make the process easier for the estimated more than 2,000 Coloradans who have earned medical degrees. and licensed in other states so they could join Colorado’s workforce of doctors. The group has released a list of three main recommendations, including six proposals that require legislative action or approval by the Colorado Medical Board.

Those recommendations include allowing physicians who had an active medical license in another state to qualify for a Colorado license by successfully completing a competency assessment; international medical graduates who have not qualified for an active license in another country, who are able to apply for internships to practice in a clinical setting and are eligible for residency; and increasing the number of residence and destination places for qualified international medical graduates.

“NPATCH’s recommendations regarding the licensing pathways available to International Medical Graduates (IMGs) could enable Colorado to take advantage of underutilized medical expertise in our communities,” said Lee Rasizer, a spokesperson for the Colorado Department of Regulatory Agencies. , in an email. “In the longer term, successful implementation can attract medical expertise from a wider range and potentially help reduce health care deficits.”

In April last year, Governor Jared Polis signed an executive order temporarily changing certain licensing requirements for medical professionals, including for international medical graduates who could qualify for temporary licenses under certain conditions until May 31, 2022. This was independent of the NPATCH recommendations and was intended to help meet the high demand for medical professionals with a rising number of COVID cases.

But only two international medical graduates were able to get their temporary licenses, and only one is currently practicing with them, according to Carrie Miller, program manager for the Spring Institute’s Colorado Welcome Back program. The organization helps internationally trained healthcare professionals build careers in the healthcare industry in Colorado.

Problems arose with malpractice insurance, but it also became clear that there were still too many barriers to entry for those who had received medical training outside of the United States.

Those barriers often include time and cost — many professionals end up having to take other jobs to support their families more quickly, and residency programs in the state don’t accept anyone who graduated more than three years before, said Victoria Francis, state attorney general for the International Rescue Committee.

“Even if you were a surgeon running a hospital in another state, you come to Colorado and you don’t have the option to go back to a medical residency unless you leave the state, so there’s a whole host of reasons why it’s very difficult for these people to put their skills to work in Colorado,” Francis said.

Lawahiz Abbas, an international medical graduate from Sudan who moved to Colorado in 2012 to join her family after seeking asylum, knew she would have to start from the very beginning to pursue a medical career. But first she needed time to adjust to her new country: to get to know the language, culture and its systems.

When she was ready to join the doctors, she kept running into obstacles. She decided to take other paths while continuing to work on her license. She has worked as a medical interpreter and with refugee programs in health centers. She is studying for a master’s degree in public health.

“I won’t stop trying,” Abbas said. “I hope they can do something to make it easier because there are so many international medical graduates in Colorado. They are really qualified and really trained.”

Miller was part of the advisory panel that helped provide information for the NPATCH recommendations, and she said in her research she found that only 2.5% of all residencies in Colorado over the past decade were given to international medical graduates. .

Elejmi is one of those graduates. After moving back to the US, she studied again, passed the required exam and did medical rotations with doctors. She said she was treated like a colleague because of the amount of experience and knowledge she brought with her.

However, despite the recommendations she received and the number of applications she made, she was unable to get a match for a residency program.

Now Elejmi works as a clinical researcher for the Rocky Mountain Cancer Centers in Aurora and also serves as an advisor to the Colorado Welcome Back program to share her experiences.

Rep. Naquetta Ricks, an Aurora Democrat, plans to introduce legislation next year that would implement some of NPATCH’s recommendations, including finding a way to help international medical graduates into residency programs in the state. She also wants to look at some form of reciprocity for people who have practiced medicine in other states to find ways to practice in Colorado, possibly modeling a program after what other states like Minnesota are doing. Part of the bill still being drafted may also include requirements for these graduates to work in disadvantaged areas of the state.

“Given the shortage of medical personnel at the moment, including doctors, nurses, CNAs, we need to make sure that people who come here with a medical education have the opportunity to work in our society to do what they were trained to do,” he said. Rick.

Elejmi advocates for these changes as she continues to apply for jobs and keep up with her medical skills, and remains undaunted.

“I do what I do because I have a passion for helping people and what better way than to help people stay healthy to continue their journey in life to reach their goal,” she said. “I have so much to give.”