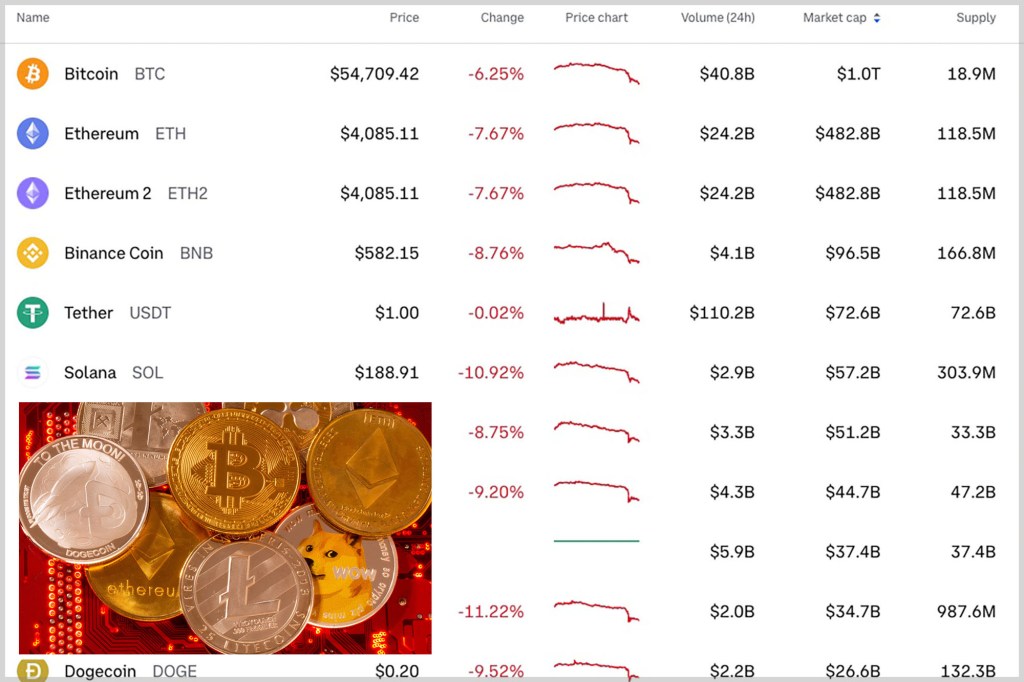 Cryptocurrencies continued their weeklong decline on Friday, with the value of the overall market falling below $2.5 trillion as bitcoin officially slipped into bear market territory.

At 7 a.m. ET, the total market cap of all cryptocurrencies had fallen to $2.4 trillion, a drop of nearly 9 percent in the past 24 hours.

Bitcoin – the largest cryptocurrency in the world – is down nearly 8 percent since Thursday morning.

The digital currency last traded at $53,580, a six-week low and more than 20 percent lower than its all-time high of about $69,000 reached earlier this month.

Ether, the original currency of the Ethereum blockchain, has fallen more than 10 percent in the past 24 hours, as has the binance coin, the third-largest cryptocurrency.

The crypto sell-off came as concerns about a new COVID-19 variant in South Africa terrified investors and put pressure on global equity markets.

But many crypto enthusiasts have hailed bitcoin as a sort of safe haven for investors, serving as a digital alternative to gold, which has long been a favorite among investors when they’re nervous about the macroeconomics, such as during the pandemic.

However, as bitcoin and other cryptocurrencies collapsed amid uncertainty on Friday, the value of gold rose as investors sought to protect their assets.

Individual factors, including a bill that lawmakers in India are preparing that would more strictly regulate and potentially restrict cryptocurrency trading, are also weighing on the prices of the digital tokens.

Bitcoin and other cryptos have been declining steadily for a few weeks now. And this week, many profitable tech companies announcing growth potential saw their stocks plummet, suggesting investors are moving away from volatile and risky assets for more proven investments that are more resilient to an uncertain macro environment.