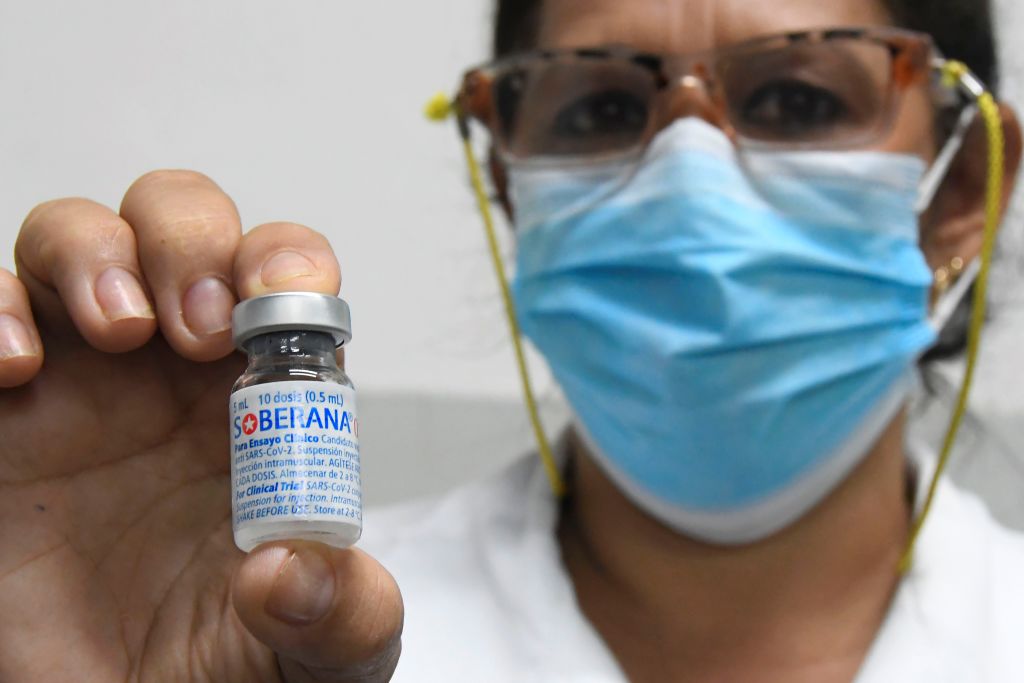 Much of the press coverage of Cuba last week focused on the failed anti-government protests. Less covered is something of potentially greater global significance: the vaccination drive.

After a horrific 12 months as a hasty reopening fueled the pandemic, the death toll peaked and the country plunged back into crippling lockdown, a successful vaccination program has reversed the pandemic in the country. Cuba is now one of the few low-income countries to have not only vaccinated a majority of the population, but also the only one to do so with a vaccine they developed themselves.

The saga suggests a way forward for the developing world that continues to grapple with the pandemic in the face of ongoing corporate-driven vaccine apartheid, and points more broadly to what is possible when medical science is decoupled from private profit.

According to Johns Hopkins University, at the time of writing, Cuba has fully vaccinated 78 percent of its population, ranking it ninth in the world, ahead of wealthy countries like Denmark, China and Australia (the United States, at just under 60 percent. of the vaccinated population ranks sixth). The turnaround since the vaccination campaign began in May has revived the country’s fortunes despite the twin shocks of the pandemic and an intensification of the US blockade.

After a peak of nearly 10,000 infections and nearly a hundred deaths a day, both numbers have now fallen sharply. With 100 percent of the country taking at least one vaccine dose by the end of last month, on Nov. 15 the country reopened its borders to tourism, about a tenth of its economy, and reopened schools. This makes Cuba an outlier among low-income countries, which have vaccinated only 2.8 percent of their combined population. This is largely due to the developed world’s hoarding of vaccines and their jealous surveillance of patent monopolies, which prevent poorer countries from developing generic versions of the vaccines produced with public funding in the first place.

Key to this result was Cuba’s decision to develop its own vaccines, two of which – Abdala, named after a poem by an independence hero, and Soberana 2, Spanish for “sovereign” – were finally officially approved in July and August. In the words of Vicente Vérez Bencomo, the internationally acclaimed head of the country’s Finlay Vaccine Institute, the country was “betting safe” by delaying production of its own vaccines. In this way, it would avoid reliance on bigger allies such as Russia and China while adding a new commercial export at a time of ongoing economic hardship.

These efforts are already underway. Vietnam, with only 39 percent of the population fully vaccinated, signed a deal to buy 5 million doses of vaccine, of which Cuba recently shipped more than 1 million to its communist ally, 150,000 of which were donated. Venezuela (32 percent fully vaccinated) also agreed to buy $12 million of the three-dose vaccine and has already started administering it, while Iran (51 percent) and Nigeria (1.6 percent) have agreed to work with the country to develop their own vaccine. homegrown vaccines. Syria (4.2 percent) recently spoke with Cuban officials about the prospect of doing the same.

The two vaccines are part of a series of five COVID vaccines that Cuba is developing. That includes a nasally administered vaccine that has progressed to Phase II clinical trials, one of only five vaccines in the entire world to have a nasal application, according to one of its top scientists, which could be particularly helpful if proven to be safe and effective. , given the entry of the virus through the nasal cavity. It also includes a booster shot specifically designed to work for people who have already been vaccinated with other vaccines, and was recently tried out on Italian tourists. Since September, Cuba has been in the process of gaining World Health Organization approval for its vaccines, which would open the door to their widespread adoption.

According to Helen Yaffe, senior lecturer in economic and social history at the University of Glasgow, there are several aspects that make Cuba’s vaccines unique besides their country of origin. At the heart of this is Cuba’s decision to pursue a more traditional protein vaccine rather than the more experimental mRNA technology used for the COVID vaccines that we have become familiar with, which had been in development for decades before it was launched. start of the pandemic led to a breakthrough.

This allows Cuba’s vaccine to be stored in a refrigerator or even at room temperature, as opposed to the subpolar temperatures that the Pfizer vaccine must be stored at or the freezer temperatures that Moderna’s vaccine requires. “In the South, where huge amounts of the population don’t have access to electricity, it’s just another technological hurdle,” Yaffe says.

And while the mRNA technology, which has never been used in children before, has led to a delay between adult and child vaccination in the developed world — meaning vaccines for children under five are still being developed — Cuba tried to create a vaccine from scratch that children can take. As of this month, more than four-fifths of all children aged two to eighteen have been fully vaccinated.

While about two-thirds of all children have been excluded from school in Latin America and the Caribbean since September, Cuba has now reopened its classrooms. Gloria La Riva, an activist and independent reporter who has visited Cuba all year round and has been in Havana since mid-October, described the scene in the Ciudad Escolar 26 de Julio as parents and grandparents arrived for the school’s reopening.

“It’s very important for the families,” she says. “Everyone feels this immense pride.”

While in the United States and other developed countries, life-saving drugs are largely developed thanks to government funding before their profits and distribution are relentlessly privatized for business enrichment, Cuba’s biotech sector is wholly owned and funded by the government. That means Cuba has decommodified a vital human resource — the exact opposite policy direction we’ve seen in the last four decades of neoliberalism.

Cuba has spent billions of dollars creating a domestic biotech industry since the 1980s, when a combination of a dengue outbreak and new economic sanctions forced the hand of then-President Ronald Reagan. Despite a crushing blockade by the United States, which is responsible for a third of global pharmaceutical production, Cuba’s biotech sector has fared well, making nearly 70 percent of the approximately 800 drugs Cubans consume and eight of the 11 vaccines in the nation. the country’s immunization program, and it exports hundreds of millions of vaccines a year. The income is then reinvested in the sector.

“All these vaccines that have a very big impact on science are very expensive vaccines, economically inaccessible to the country,” Vérez Bencomo said recently of Cuba’s decision to develop its own vaccines.

The sector enjoys international renown. Cuba has won ten gold medals from the United Nations World Intellectual Property Organization (WIPO), including for developing the world’s first meningitis B vaccine in 1989. In 2015, Cuba became the first country to prevent maternal-to-mother transmission. child of HIV and syphilis, a result of both the retroviral drugs it had produced and its robust public health care system.

In this way, Cuba has been able to do the unthinkable, developing its own vaccine and surpassing much of the developed world in overcoming the pandemic, despite its size and level of wealth, and despite a policy of joint economic strangulation by a hostile government off its shores. International solidarity efforts have also been vital. When the US blockade meant a shortage of syringes on the island, jeopardizing the vaccination campaign, solidarity groups from the United States alone sent 6 million syringes to Cuba, while the Mexican government sent eight hundred thousand more and more than one hundred thousand of them. those coming from Cubans in China.

Still, there is some uncertainty about Cuba’s vaccines. Its use in Venezuela has been criticized by unions of pediatricians and medical and scientific academies, on the same basis as other critics, who say the results of the vaccine trial have not been peer-reviewed and published in international scientific journals. The Pan American Health Organization has called on Cuba to make the results public.

For his part, Vérez Bencomo reproaches an international community hostile to Cuba. In a September interview, he claimed that Cuba’s scientists have been discriminated against by major journals, which he says have rejected submissions from Cubans in the past while later publishing similar research from other countries, and acted as “a barrier that tends to block scientific research.” marginalize results”. who come from poor countries.”

These are pretty serious accusations from a globally respected scientist. Vérez Bencomo, winner of the Cuban National Chemistry Award and a 2005 WIPO Gold Medal, led the team that worked with a Canadian scientist to develop the world’s first semi-synthetic vaccine, creating a more affordable injection to protection against Haemophilus influenzae type B. the cheap vaccine against meningitis, he was not allowed to travel to California in 2005 to receive an award for it, with George W. Bush’s State Department declaring his visit “damaging the interests of the United States”. In 2015, he was made a Knight of the Legion of Honor by the then French Minister of Social Affairs and Health, who praised him for his work and called him a ‘friend of France’. (Vérez Bencomo did not respond to a request for an interview).

While Cuba’s recovery from the pandemic suggests that his and the Cuban government’s faith in the vaccines is not misplaced, it may take a little longer for them to gain official imprimatur from the international scientific community. Should it come, it would prove a powerful refutation of the company-driven vaccine model that has so far dominated, which means that, in line with Big Pharma’s points of discussion, only profit-driven competition can produce the kind of life-saving innovation that the world is desperate for.

Perhaps more importantly, it could be a way for developing countries to finally crawl out of the pandemic-shaped hole that now, months after vaccines have been rolled out in rich countries, it seems to be getting no closer. Western governments have continued to resist calls from the South to waive vaccine patents and allow them to manufacture or buy cheaper generic versions, leaving the vast majority of the world’s population still vulnerable to the virus — and, ironically enough, endangering all of us, should new, mutated, vaccine-resistant strains enter the country-sized Petri dishes that these unbalanced policies have created. In that sense, we must all hope Cuba’s vaccines prove to be as successful as the scientists know for sure.