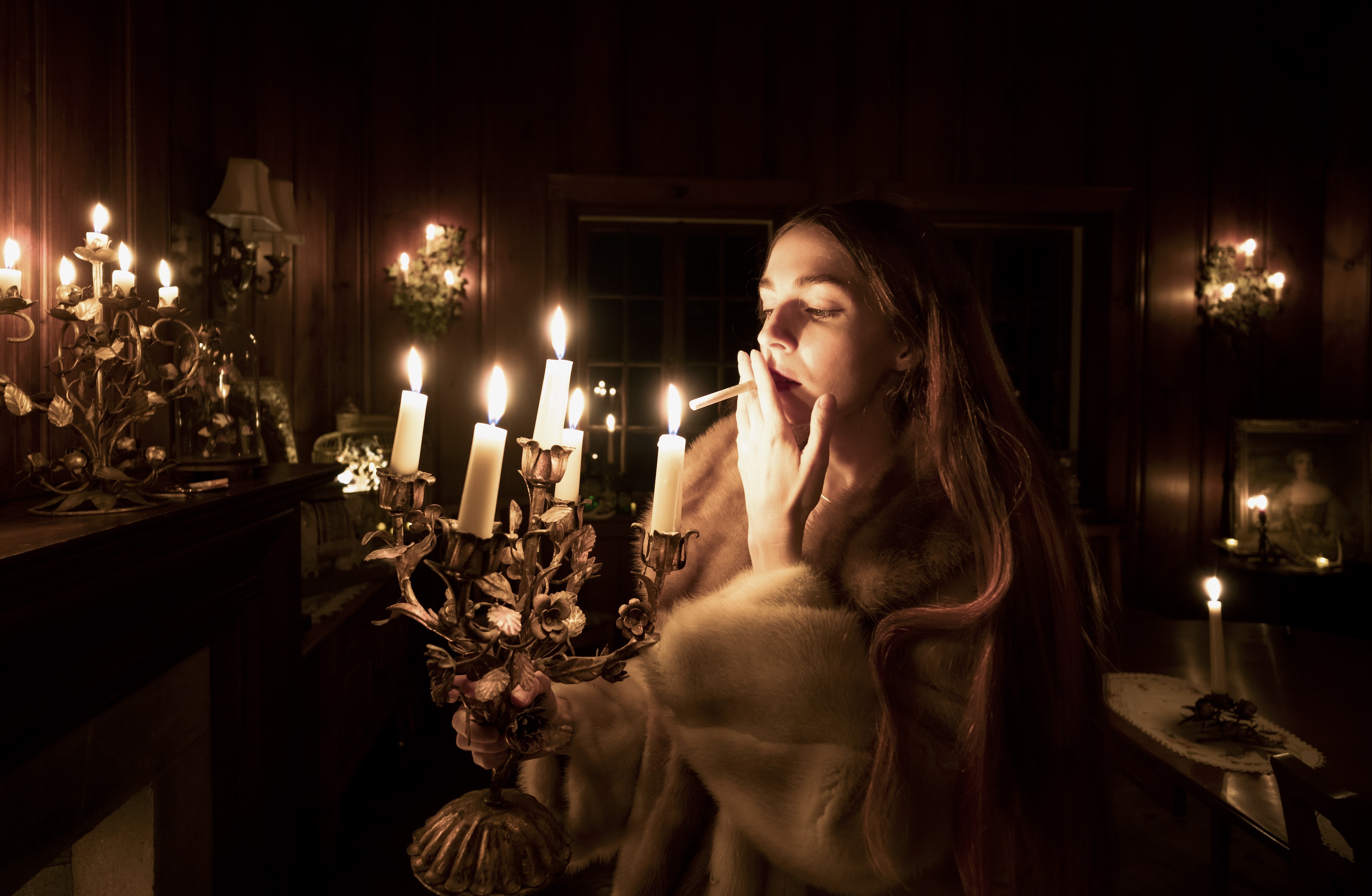 Set primarily in Tendler’s home, the series is lit almost exclusively by tungsten lamps of her own design – a multidisciplinary artist, she also creates handmade Victorian lampshades. Her interest in textiles and patterns is only emphasized in the photographs, spanning a number of different, visually rich (and often wallpapered) rooms, from the living room and bedroom to a mirrored dance studio and the hallway staircase.

Tendler is a social media pioneer, an early Tumblr star whose daily makeup gained her 350,000 followers, and a YouTube series titled “The Other Side” that combined beauty with the paranormal in ways that depict the ghostly aesthetics of her later work. In the weeks leading up to her massive success at Other Art Fair LA, Tendler spoke exclusively to The Observer about themes of loss, isolation, and the way the specific can be universal in these trying times. It is the first interview since her much-discussed split with her husband, comedian John Mulaney.

“The house I live in, where I take these photos, was kind of a realization of my personal aesthetic when I designed it,” Tendler told The Observer. “When I did, I didn’t quite realize it was going to become a character in my artwork as well.”

She started creating her series in January and started sharing photos online a few months later. “March Dinner” — a long dining table for two, with only Tendler seated, head bent against her wrist in distress — struck a chord with the isolated dude. The ongoing line of her series encompasses “the often nonlinear experiences of loss, anger and powerlessness, as well as a reclaiming of identity,” and while that sounds wrought, there are certainly moments of levity. (See: her re-creation of George Harrison’s “All Things Must Pass” album cover.)

“We’ve all lost things in the past year and a half. I think many people have felt isolated and powerless against what is happening in the world. It feels like a really tough time for humanity,” Tendler said. “I was a little surprised, when I started sharing the work, how universal it felt.”

She added: “When we’re dealing with grief or loss, we often think we’re the only people who have those experiences… we’re probably not as alone as we think we are.”

And this universality also finds a home in one of her core interests throughout the series: astrology. “Rooms in the First House” refers to Tendler’s astrological home as much as it does her home. Some of the photos are explicitly named after astrological events, while several others were taken during an astrological event.

“I would say [my photography and astrology are very entwined] … this year I am in the first house,” Tendler explains. During astrological events, “it kind of became my ritual to set up and take a picture that looked like writing down my intent, whether you know, letting go or manifesting something.”

She takes “at least an hour” to put together some of her images, “taking things out of my house that are a little bit meaningful to me.” Common appearances include flowers and especially decorative antlers, which are often symbolic of regeneration – a clear match to the first home, also known as the home of the self.

“The pieces I’m not in, they still reflect a lot of me or have a lot of symbolic meaning. But because I’m not physically there, I feel much more comfortable going into it,” Tendler said. These were taken with a portrait lens, as opposed to the photos she was shot in — photos with her body are far away, taken. with a wide-angle lens, she calls them “voyeuristic” to some extent.Even as the creator, she explains, she feels an extra measure of space from them.

As a former dancer, Tendler knows very well how to pose her body for photos; in “God, it’s brutal in here” she’s on a hanging slide down the stairs, her legs almost hovering over the steps; in another image, she straightens a pointe shoe with her leg bent at right angles on a piano bench, a black tutu around her, a fleck of tulle barely hiding her eyes. It is the attention to detail that makes the photos so picturesque and immobile.

It’s easy to imagine her as the ghost that haunts the house; the waif pressed her hands to her eyes, wearing only lingerie. But it is opposed by other works in the series: In ‘Good Mourning’ she is regal and authoritative, unique in a space clearly meant for many; in an untitled work she throws plates from a high window, far from their crush; in another eerie work, her bare back to the camera in what could be a séance or sacrifice or summoning, candles lit and antlers placed.

“A lot of [the series] just has to do with female identity in particular. We have so much going on inside of us, and we have so many different characters that we either play or that society forces us to play,” Tendler said. “In part, it’s kind of a nod to that kind of experimentation with all the selves that live in us.”

Those selves appear in different positions, different outfits: takeaway in bed, lighting sage in a silk dress, plop down in a chair. In one photo, Tendler slyly stares at the camera as she lights her cigarette with a candlestick.

By capturing a multitude of selves that grow stronger and falter, finding independence in the void and suffering in its vastness, Tendler has seized upon not only a personal experience, but also the recognition of the self in such an isolated period. And with a great deal of grace and wisdom.

“When I was young I loved ‘The Secret Garden’ and these kinds of haunted spaces, and these old, like abandoned castles – they felt very romantic to me, or like places I wanted to live. I wanted to live in a haunted attic or something like that, or an old Victorian house,” Tendler said. “I’m not sure I can really accurately articulate my aesthetic, but it was definitely informed by a Victorian ghost.”

Don’t miss what we see. Get the Observer’s art coverage delivered to your inbox. 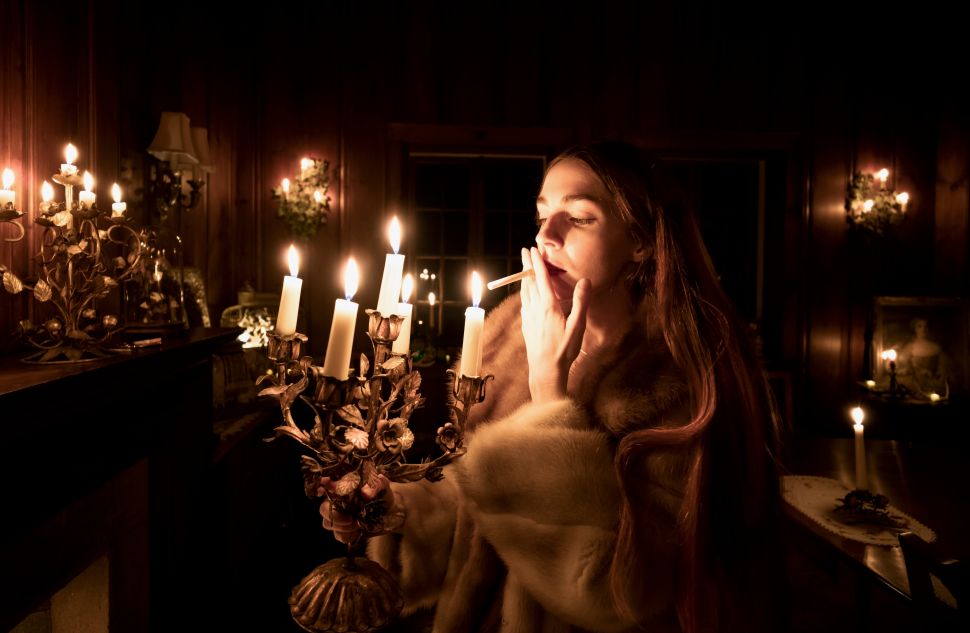