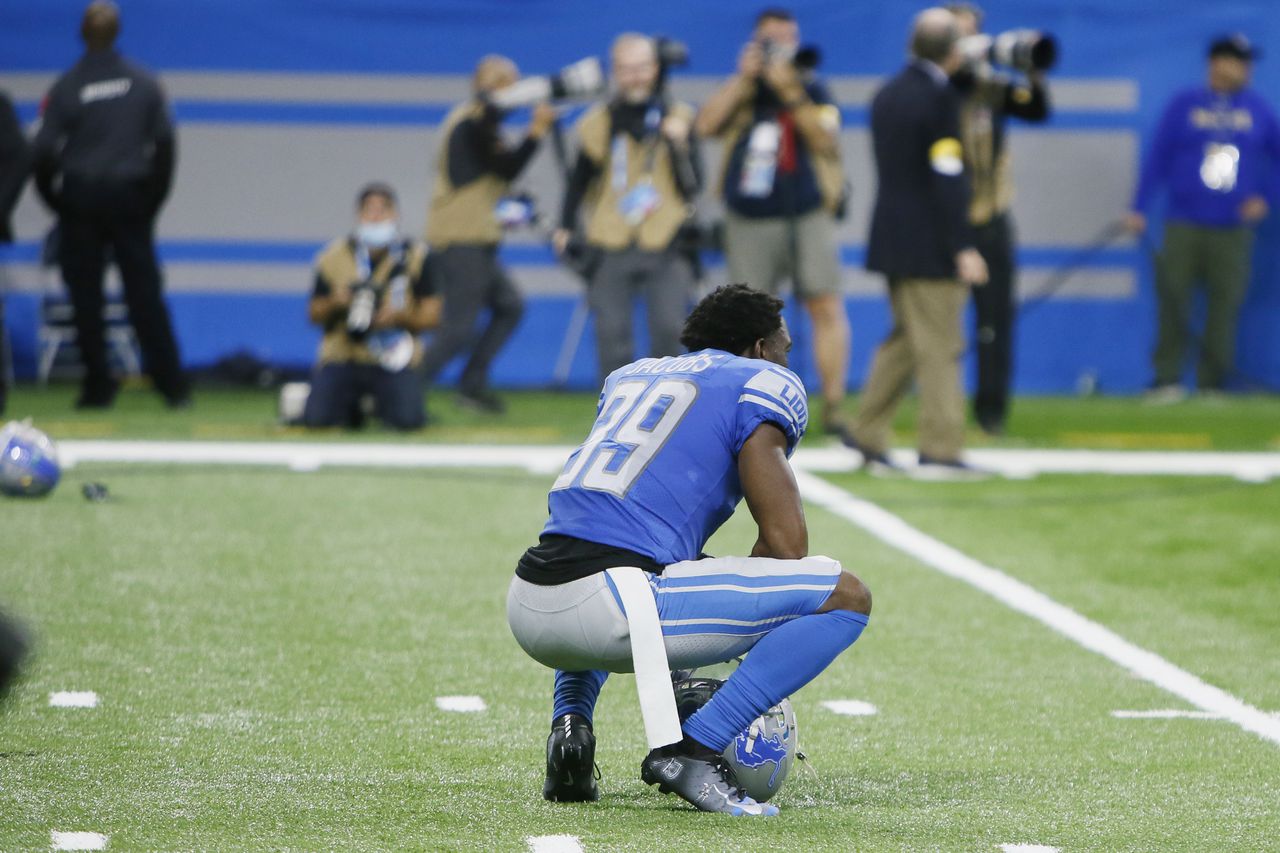 DETROIT — The Detroit defense suffered from communication problems throughout the game, with his last stand sticking out like a sore thumb in the 16-14 loss to the Chicago Bears on Thanksgiving.

The Bears used an 18-play, 64-yard drive to eat up the last 8 minutes and 30 seconds of play to drive the Lions away. They started on their own 21-yard line, racked up six first downs and kicked the game-winning 28-yard field goal at the buzzer. As if that wasn’t enough, the Lions discovered a new way to top off their loss: consecutive timeouts without a mention, resulting in a 5-yard penalty for third and nine, while also were left with only one chance to stop the clock. Dalton and the Bears moved the chains, kneeling him three times and kicking the winner of the game as time went on.

“They came out really early throwing the ball,” said Lions coach Dan Campbell when asked about the final drive. “They would try to loosen up the front and open us up a little bit and support us a little bit. Then they came out in the second half and started running it, did a few things. And look, a few came Penalties showed up that left us dead They hurt us I’ll come back to this in general in a moment We’ve had too many penalties today but the penalties some teams can overcome them and some can’t we can take the penalties what we get now cannot be overcome.

“But in the end, I just had — defensively, I felt like they really stuck back in it. And I just want — if you stop your opponent from scoring 16 points or whatever — which is three weeks in a row — we have to be able — we have to find a way to win that game. So defensively I know they’re giving us a chance now.”

While Campbell is not wrong, it was again the defense that failed in the closing minutes despite another strong performance. The Lions are 0-2-1 while keeping their last three opponents at 20 points or less each week. Last week it was the Browns who drove Nick Chubb back and put the game on ice after Campbell chose to kick the team’s last chance. This week it was Andy Dalton’s combination that made the game possible, including a handy little option-like throw to David Montgomery, while taking advantage of Detroit’s miscommunication and penalties.

It’s not like the Bears were reinventing the wheel on that last ride. It was a heavy dose of Montgomery, with the running back running six times for 17 yards in that game-winning run. Dalton was four for six and passed 36 yards on the winning drive, kneeling three times to set up the field goal. The veteran quarterback hit Damiere Byrd for 12 yards on the third and 5 of Chicago’s 37-yard line, then hit Cole Kmet for 12 yards on the second and 11 on Detroit’s side. He returned to Byrd on third-and-4 after the 7-yard timeout penalty, putting the game away with the Lions unable to stop the clock enough to make a difference.

“It’s frustrating,” said Lions linebacker Alex Anzalone. “I feel like we have to stop them defensively. We were in charge and we have to find a way to get them off the field and not score any points. That’s it.”

See below for more information from the locker room after Detroit’s latest loss:

Lions coach Dan Campbell on what went wrong regarding the defensive communication: “It was a check by what they were doing. So you don’t get it until it’s in the middle of the play, but it’s something we talked about. And so you don’t get it pre-snap, it’s a call and it basically has a check on what they’re going to do and what they line up offensively is what happened. So we had half in one conversation and half in another. So the first thing that pops into my head is, ‘Well, we’ve got bad cover and they’re about to score a touchdown, so I’ll do it, which you can’t do and now it’s a penalty. But I know if he threw it into a flat, it would be a touchdown.” Can it not.”

Anzalone, the team-voted captain and center linebacker, on the double timeout situation: “We were more or less in cover zero, and they went to max pro. We checked to two high, cover two. And that’s why I tried to relay the call. After that I don’t remember exactly what happened. I think we mentioned timeout, and I’m not sure everyone was on the same page. It was still, I think, third after that. Anyway, the 5-yard penalty wasn’t that big of a deal. Instead of a touchdown, the game was really out of reach.”

Lions CB Amani Oruwariye’s take on the miscommunication: “We need to communicate, man. There were a few substitution errors, as I said, miscommunication. We just can’t take it, man. Especially the type of season we have, we have to eliminate mistakes or any kind of miscommunication. So we’re going to clean that up.”

Oruwariye on what he saw on his interception, despite not looking good before the snap: “I just knew when it reached a certain part of the red zone — they do a lot of intrusion routes. I know you can’t run past the end zone, so I just cut under it.”

Campbell on his offensive playcalling: “Do you think I should have thrown more? I saw you. throw deeper? I think I — and I’m not judging what you’re saying — I understand. I understand there may be some frustration. But it’s also that I’m aware of how you keep yourself in this game, football keeps moving. There were so many things we did at the beginning of this year to prevent disasters. It’s a mess, it’s all this because we’re trying to be a little bit more aggressive. So maybe we could have done that, but I feel like we threw more at the end of the day than we did. You try to do a few things and once you’re on hold and they’re just staring at you, you try to be smart about how you’re going to do it. You want to put yourself in a third-and-manageable at that point — let’s find a way to get to third-and-7 and if you don’t, now you’re sitting there, it’s third-and-a mile and it is difficult. I don’t regret that. I still want to be able to run football because I think that’s how it starts. I like that we threw it a little deep. We were able to push the ball across the field. We have a big touchdown. I think you’re back there — take it where it goes. Give yourself a chance. We had a chance in the end. It wasn’t good enough. But I compare that with no more throwing, I compare that with penalties.”

Lions LT Taylor Decker on how hard the frequent call calls were to overcome: “It’s frustrating, but I mean, that’s a good way to say it, you can’t lose your sting because football is an aggressive sport. As an o-lineman, you do everything you can to get your hands in, and try to drive the man, and be aware of where the ball carrier is, where the quarterback is, but hey, you have to keep playing aggressive. You just have to try to play with good technique and good awareness, and when they call it, they call it. But we’re not going out to play for now. I think that would be the wrong way to go about it. Obviously I haven’t seen every rerun of what was mentioned, so we’ll have to watch the band to see how we can improve that.”

Lions QB Jared Goff tells if this young roster should learn to win: “First you have to learn how not to lose and it’s something that we obviously struggled with, especially in these close games. How do you take care of football late in the game? How do you make stops at the defense? How do you move the ball efficiently later in the game and not hurt yourself? For me, how do I stay in the bag and not let those guys move from my spot and allow call waiting in some cases? It’s little things like that that the good teams do and do consistently and something that we’re working towards, something that we’re moving towards, I believe. But it’s something we’re working towards.”