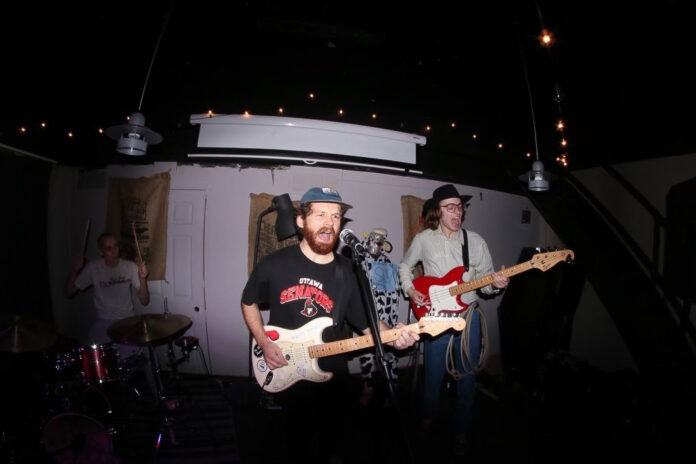 The band sorry snowman started as the solo project of Carleton music student Sean Lundy in 2018. He released his first solo EP while living in the Grenville residence building of Carleton University during his freshman year.

The band, which now consists of Lundy, Owen Allan, Cole Hallman and Dax Cardoso-Grant, owes their formation in part to the Carleton housing placement algorithm.

Lundy bonded with Allen and Hallman over similar musical tastes while living together on the third floor of Grenville. They started jamming together and soon after picked up drummer Cardoso-Grant at a house party. The rest is history.

Since they found each other mainly through their hometowns, the band has stayed together all their time by moving to an off-campus house after their freshman year with Carleton.

“It is, of course, quite chaotic. But it is often very inspiring and fun.” Hallman said:. “A number of our friends’ bands also practice in our basement, so there’s always a lot of music around.”

“There’s a lot of stumbling over guitars and toy keyboards,” added Cardoso-Grant.

All four members of the band came to Carleton with a strong interest in already established music.

Hallman said he first picked up a bass when he was eleven.

“I really got into the Beatles and I thought Paul [McCartney] was so cool,” he said. “I’m more of a George man now, but I definitely owe my start in bass to Paul.”

Lundy and Cardoso-Grant also picked up their instruments over a decade ago and have been hooked ever since.

“When I was 10, my dad told me to learn piano or guitar and I thought piano was weak,” Lundy said. “I stuck to” [guitar] because it’s kind of the main vehicle of the music I listen to.”

While performing together, each band member has a different choice of favorite song to perform.

“I think my favorite song to play is a new song called All wrongHallman said. “I get to tap dance with my pedals and live my shoegaze dream for a few minutes.”

Lundy said his go-to when playing live is Halloween party.

“I feel like it’s a song that best represents our sound right now,” he said.

In their first live show since the COVID-19 pandemic, Sorry Snowman kicked off with their return to the stage at Happy Goat’s Preston Street cafe in October. Besides local bands Sven and Daddy Sports, Sorry Snowman brought a healthy mix of originals and covers to this intimate Indie rock night.

Cardoso-Grant said he hopes to perform at more events like this one aimed at a younger student crowd in the future. He emphasized the need for performance venues more suited to the audience the band attracts.

“Many of the locations [in Ottawa] are aimed at an older audience,” he said.

Sorry Snowman is booked to play next at Avant-garde on November 27, a Russian-themed venue near Sandy Hill.

“We play with two super cool bands called Class of 91 and Mad Gamma. It should be a good time,” Cardoso-Grant said.

In the meantime, the band is also working on a new album. As with their debut album, titled sorry snowman, it will consist of eight tracks. Lundy said he wants this one to be a step up in energy compared to their first album. The release date is still pending.

“This time we really want them [the songs] to be a little more exciting than the one on the first album,” Lundy said.