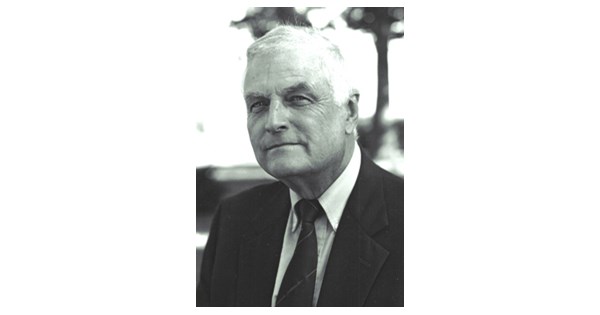 Thomas Edward Thompson, Harry F. Byrd Jr. Professor Emeritus and past chair of the Department of Biochemistry at the University of Virginia School of Medicine, died Nov. 16, 2021 at the Martha Jefferson House in Charlottesville, Virginia.

Thomas, the only son of Theron and Florence Thompson, was born on March 15, 1926, in Cincinnati, Ohio, and grew up in Kalamazoo, Michigan. After serving in the military from 1944 to 1946, he attended Kalamazoo College and received his BA in 1949. Dr. Thompson received his Ph.D. in biochemistry from Harvard University in 1955. After postdoctoral fellowships in Sweden and England, he became an assistant professor and then associate professor of physiological chemistry at Johns Hopkins University School of Medicine in 1958. In 1966 he joined the faculty of the University of Virginia as professor and chair of the Department of Biochemistry. dr. Thompson served as department chair until 1976 and continued to teach and conduct research in the department until his retirement in 1997.

The research of Dr. Thompson concerned the biophysical study of the structure and functions of biological membranes with special emphasis on the lipid bilayer component. He was also interested in the physical chemistry of phospholipids, lipid proteins and macromolecular interactions. He has authored more than 200 scientific publications based on his studies and the work of more than sixty postdoctoral fellows, graduate students and faculty colleagues. He has held both pre- and postdoctoral fellowships, a Career Development Award and Merit Award from the National Institutes of Health. Among other things, he was president of the Biophysical Society in 1976, received the Macy Faculty Scholar Award, the KC Cole Award, the Alexander von Humboldt Prize and the Avanti Award in Lipids. In 1999 he was elected a Fellow of the Biophysical Society and was editor of the Biophysical Journal from 1987 to 1992. As a member of the editorial and advisory boards of a number of scientific journals, he was also scientific advisor to the National Institutes of Health and the National Science Foundation for many years. He was a member of the Society of Fellows at the University of Virginia.

In addition to his scientific interests, Tom was devoted to his wife, Maria-Michaela (Mike) Smits, whom he met and married while they were both pursuing their PhDs. Their house and table in Greenwood were a welcome meeting place for family, neighbors, friends and colleagues. Guests could count on a meal from the bounty of their garden, which Tom and Mike planned and cared for together. Family ski, canoe, camping, and fishing trips were popular events, as were department and neighborhood gatherings. Thompson’s holiday meals almost always included graduate students and postdocs, and Tom nurtured friendships across the country and around the world. In later years, Tom and Mike made annual trips to Montana, Wyoming, and Colorado to pursue their shared passion for fly fishing and the outdoors. A proud and adoring grandfather, he cherished the many talents of his sons, their wives and grandchildren.

dr. Thompson is survived by his wife of 68, Maria-Michaela Smits; three sons and their husbands, Stephen and Claire and daughter, Amelia, of Charlottesville, Christopher and Perrin and daughter, Elizabeth, of Portland, Oregon, and David and Maggie and children, Henry and Rowan, of Afton, Virginia. He was predeceased in 1980 by his eldest son, Peter.

In lieu of flowers, the family is asking for memorial contributions to the Ivy Creek Foundation (https://ivycreekfoundation.org/) or Habitat for Humanity of Greater Charlottesville (https://www.cvillehabitat.org/).