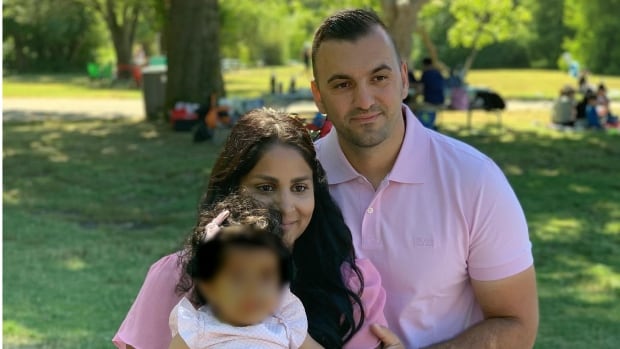 A Vancouver couple traveling home to their toddler and a rugby player who is originally from Calgary have been identified as among those killed last week in a mudslide that swept down a highway in BC.

Anita and Mirsad Hadzic were on their way home when they got caught up in the slide on Highway 99, also known as Duffey Lake Road, south of Lillooet, a town about 250 kilometers northeast of Vancouver.

Family friend Ali Azodi, who said Mirsad was “like a brother”, said the couple left behind a two-year-old daughter. He said the couple were on their way home from a long weekend getaway in Okanagan.

The Duffey Lake slide is one of dozens of mudslides that destroyed major roads in southwestern British Columbia last weekend during a torrential downpour.

Authorities have recovered a total of four bodies from the rubble, while a fifth man is still missing.

Two fundraisers have been set up to raise money to care for the couple’s daughter. They said the couple had been sweethearts from high school.

“Anita and Mirsad were the most wonderful parents… They were kind, hardworking and loved by so many,” read one fundraiser.

“This devastating loss is felt by so many who loved them dearly,” said the other.

Rugby community mourns one of its own

Steven Taylor, a father and rugby player who is originally from Calgary, was also killed.

Dean Hopkins, a friend, said Taylor had been to a labor camp north of Vancouver but decided to go home after the camp closed due to the weather. He called his wife to let her know.

They spoke no more.

Rugby Canada is saddened to learn of the passing of one of us.

Steven Taylor was tragically killed in Monday’s mudslide in Duffy Lake, just outside Lillooet, BC, caused by the catastrophic rain and subsequent flooding that hit British Columbia. pic.twitter.com/1P2BbRcgvv

“There will be hundreds, if not thousands of rugby friends, players in our city and county who will feel exactly the same. That was the kind of man he was,” said Hopkins, noting that Taylor’s wife was heartbroken.

“There is a difference between losing someone and having someone ripped out of your life in the short term. She is absolutely inconsolable.”

Taylor moved from Calgary to Vancouver with his wife and children for construction work, Hopkins said.

RCMP said on Saturday that the search at the Duffey Lake slide area had ended after the bodies of three men were recovered. The body of Anita Hadzic was found on November 16.

One man is still missing.

“All current search efforts have been exhausted and discussions are ongoing about how and when best to proceed,” a RCMP press release said on Saturday.

View | Mudslide death toll in BC rises to 4:

The bodies of four people have been recovered after a mudslide on Highway 99 near Lillooet, BC. Meanwhile, clean-up efforts continue in areas hit hard by flooding — with members of the Canadian Forces dispatched to help. 2:01