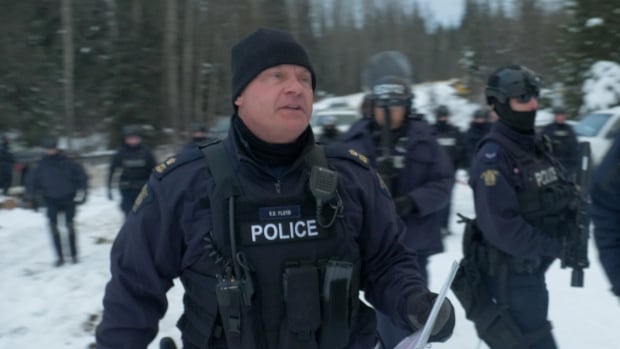 The RCMP says it expected a greater threat when officers came in last week to clear barricades blocking construction of a natural gas pipeline in northern British Columbia.

“Rhetoric” on social media from supporters of Wet’suwet’en’s hereditary leaders – who say the Coastal GasLink (CGL) project does not have their permission to cross the territory – led planners to believe they would face fiercer resistance , the RCMP said in a statement to CBC News.

“Our assessment of the threat … was bolstered by publicly available social media rhetoric by the protesters calling for ‘war,’ which was a change from previous protests in the area,” the statement said.

It was the third such police operation in as many years. Tactical teams, helicopters and dog units converged on the forest service road — which originates from Houston, BC, about 1,000 miles north of Vancouver — in a two-day operation that resulted in about 30 arrests.

The statement was issued in response to footage released by independent filmmaker Michael Toledano showing officers breaking into a hut with an ax and chainsaw, others pointing at assault rifles and a police dog barking outside. Toledano makes documentary for CBCs The Passionate Eye.

VIEW | Images of the RCMP implementation:

Video footage provided to media by filmmaker Michael Toledano on Tuesday shows RCMP tactical officers breaking open a door last week to arrest pipeline opponents, Toledano and another Wet’suwet’en journalist. Toledano was working on a documentary commissioned by CBC’s The Passionate Eye at the time of his arrest. 6:40

The operation, like the previous two, met little physical resistance from the two groups of Wet’suwet’en, Haudenosaunee and non-Indigenous people.

Wet’suwet’en member Sleydo’ Molly Wickham, one of the main spokespersons for the land resistance, was in that cabin and said the moment she was traumatized.

“This was a massive invasion… it was pretty intense and really scary having machine guns on you,” Wickham said.

“They were very violent in the way they arrested us without a warrant. They had no right to enter me so violently and remove me from my territory.”

Prominent Haudenosaunee base leader Skyler Williams said there were “a lot of arms swinging, it was a little blurry. When we hit the ground, our heads were … pushed into the ice.”

He said officers called him by name and attacked him before arresting him.

The RCMP maintained an order to prevent interference with all work on CGL, which is owned by TC Energy.

The RCMP said its team’s makeup remained essentially the same during last week’s operation, which involved tactical units with “standard firearms” and dogs.

The remoteness of the area, surrounded by heavy forests, and the “unpredictable nature of what we might encounter” affected the equipment and number of agents used, the statement said.

In court in underwear

Wickham, who was released Tuesday night, says she was held in solitary confinement in Prince George for two days and that she and others spent most of their time in the cells brushing without teeth and soap.

She says they were also sometimes without food or water for 12 hours – some faucets were broken.

“City cells are not places where people should be for long periods of time,” Wickham says.

Williams and Layla Staats, another Six Nations documentary filmmaker near Hamilton, say their ankles and wrists were cuffed and put in separate, box-like compartments in the back of SUVs for transport to their court hearing in Smithers, BC, on Friday. .

Both said they were not allowed to put on their clothes and were instead forced to enter the courtroom in their underwear.

“It was a very disgusting feeling to be parading around like that,” Williams said.

The RCMP flatly rejected accusations of assault and said everyone was being transported in regular transport conditions for detainees.

“The allegations that individuals were treated in a manner similar to that of dogs is ludicrous,” the statement said.

“No one was placed in leg cuffs during this operation… All detainees were given a choice of which single layer they wanted to wear while in custody. Individuals chose to wear their base layer or long johns instead of their outerwear.”