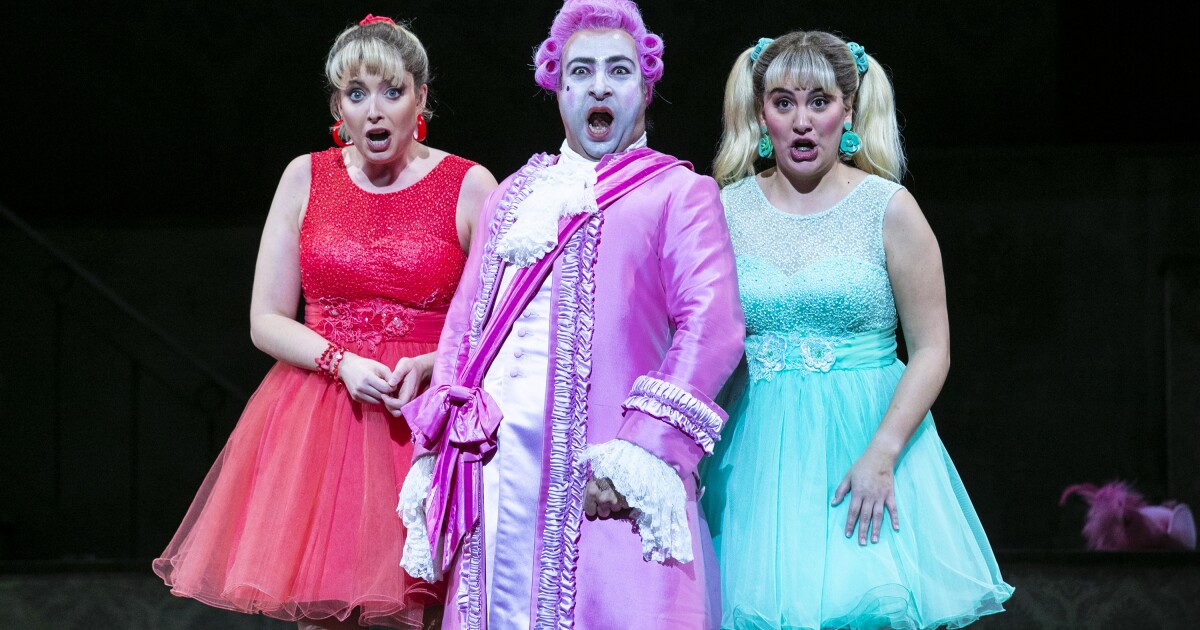 “La Cenerentola” is the second most performed Rossini opera, with “The Barber Of Seville” being a runaway number 1.

At the Los Angeles Opera, it appears regularly at 13-year intervals: first, during the company’s second season in 1987, with Frederica Von Stade as the heroine and Neville Marriner in the pit. It returned with a comedic, modern-dressed rendition in 2000, when Jennifer Larmore made Cinderella’s treacherous coloratura flights sound simple. In the 2013 production, two contrasting Cinderellas took turns, including James Conlon who set a sparkling pace and a memorable collection of sweet, helpful rats.

On Saturday Nights, Another Version of the LA Opera’s “Cinderella” — originally slated for fall 2020 but pushed back a year due to the pandemic — opened at the Dorothy Chandler Pavilion, just eight and a half years since the last. This co-production of Dutch National Opera, Grand Théâtre de Genève and Valencia’s Palau de les Arts Reina Sofia attempts to fuse two completely different worlds. It feels absurd, but in the end Rossini and Cinderella come out on top.

“Cinderella” is a fairy tale that has no set period and can be effectively staged in any era of history as long as class differences and dysfunctional families are present. For this version, director and costume designer Laurent Pelly places the home of the down-and-out Don Magnifico (Cinderella’s bumbling, self-important stepfather) somewhere in the 1950s or ’60s, cluttered with outdated furniture, a Hotpoint refrigerator, and other antique appliances. These are shuffled on different moving blocks; sometimes the stage looks like an overcrowded storage area. Cinderella’s stepsisters Clorinda and Tisbe are spoiled Valley Girls – all that’s missing is one of them crying, “Grab me with a spoon!” — and a bespectacled Cinderella toils away cleaning the family’s house.

Meanwhile, Prince Don Ramiro’s courtiers are outfitted in 19th-century Rossini-era wigs and costumes—except for the bespectacled incognito royal himself, which makes the initial mutual attraction between him and Cinderella more believable. These worlds openly collide when the court’s pink-and-white color scheme is superimposed on the dull interior of the Magnifico house. That was counterintuitive in the finale of Act I, a typical Rossini melee reflecting the characters’ confusion.

Then there’s Alidoro, the prince’s mentor, who discovers Cinderella disguised as a homeless person. Even though Rossini doesn’t use a fairy mother in his story, Alidoro becomes one when he transforms himself into a tuxedo conductor dragging an incredulous Cinderella to the prom, his baton acting as a magic wand guiding the action.

When Serena Malfi’s Cinderella throws off her glasses and shows up at the prom, she bears an uncanny physical resemblance to a great Cinderella of our time, Cecilia Bartoli – a good omen. And the Neapolitan mezzo-soprano lived up to the omen, sparing her vocal resources so that she was all alone on stage prepared for these impossible runs and scales of her final aria of wonder and joy. She did so with flair and command.

Another vocal star who stood out was a well-known lead voice in the annals of LA Opera, bass-baritone Ildebrando D’Arcangelo, who now serves as a debonaire Alidoro in his conducting phase. As Don Ramiro, South African tenor Levy Sekgapane possessed the thin lyrical voice you often hear in Rossini; the high notes didn’t really sound, but they were there.

Alessandro Corbelli returned from the 2013 production for another attempt at Don Magnifico, his voice getting stronger and more agile in the opening aria of Act II. Rodion Pogossov was a smoothing dandy of a Dandini, and like Corbelli, he had his best vocal moments in the second act.

Veteran conductor Roberto Abbado, a member of the Abbado music dynasty, was in the orchestra pit for the first time on Saturday. Without the tired practice of staged follies during an overture, Abbado conducted this overture undisturbed before a closed curtain, and his conducting grew stronger and sharper in rhythm during the second act. Unfortunately, the many streams of fast Rossijn’s chatter weren’t even close to coherence in the first act, tarnishing the momentum of those beautiful, hasty crescendos that are so hard to sing.

Thankfully, LA Opera has a track record of putting “Cinderellas” together after opening night. I attended the first and fourth performances of the opera in 2013, and I was struck by how things got tighter and more defined the fourth time around. In other words, this performance is likely to get better by the day.