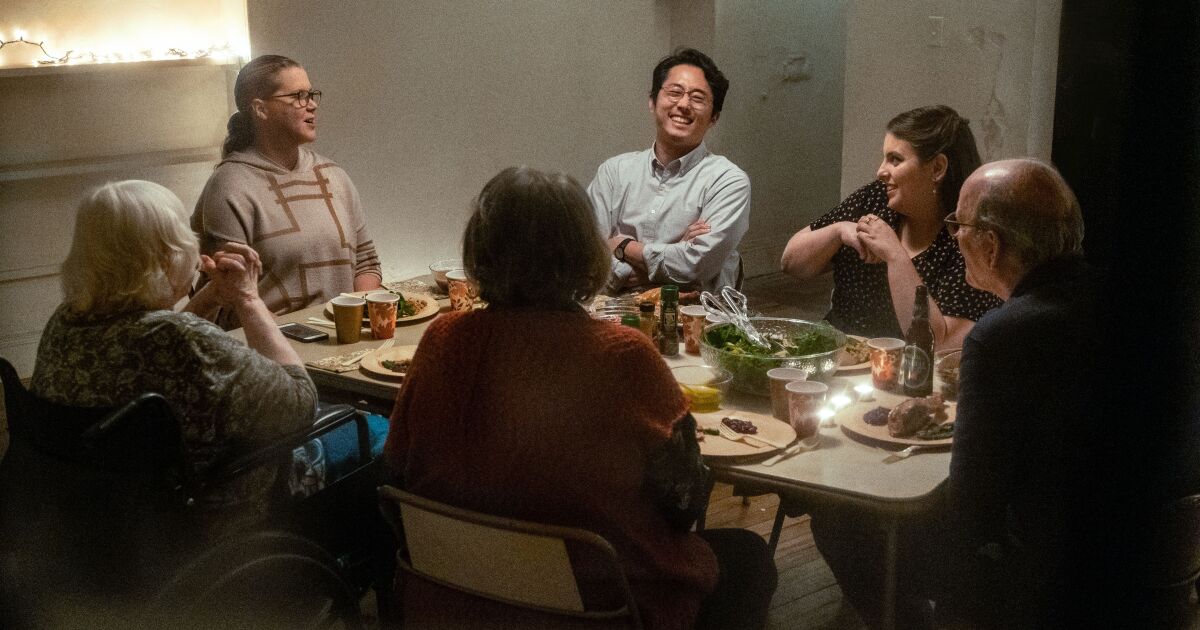 The Times is committed to reviewing theatrical film releases during the COVID-19 pandemic. Because cinema attendance during this time carries risks, we remind readers to follow health and safety guidelines set forth by the Centers for Disease Control and Prevention and local health officials.

You’ll take a closer look at your walls after seeing ‘The Humans’, Stephen Karam’s intensely claustrophobic adaptation of his Tony-winning play. For every minute of this tight but slow-moving family drama, we’re sitting in a rundown antebellum apartment in Manhattan’s Chinatown, and I mean really in the. The camera, its range of motion limited within these cramped spaces, magnifies stray details of David Gropman’s production design: the stains on the ceiling, the grime on the windows, the brownish dripping from leaking pipes, the bumpy, swirling paint textures and plaster. It’s as close to a vision of architectural entropy as I’ve ever seen in a movie. It’s also a blunt metaphor for what almost every character here experiences: the steady wasting of body and mind.

The character who perhaps feels that most acutely is Erik Blake (Richard Jenkins), the middle-aged patriarch who has gathered here with his family for Thanksgiving dinner. Normally, he and Deirdre (Jayne Houdyshell), his wife of many years, welcome everyone to their Scranton, Pa., homestead, but this year they are received by their youngest daughter, Brigid (Beanie Feldstein), at the apartment she just left. moved in with her boyfriend, Richard (Steven Yeun). Brigid’s older sister, Aimee (Amy Schumer), and their paternal grandmother, Momo (June Squibb), also take part in the festivities.

That sums up the film’s very fine ensemble, although it takes a while to figure out who’s who while watching it. Relentlessly naturalistic, Karam doesn’t line up his characters neatly (partly because there isn’t much space). Instead, he puts us inside and follows the characters into a space that is as unfamiliar to them as it is to us. He takes a little comedy of errors from the way Erik and Deirdre navigate a narrow passage in Momo’s wheelchair, and he repeatedly follows Aimee up and down a spiral staircase that leads to what appears to be the most horrifying movie bathroom since “Parasite.” The Blakes are clearly accustomed to taking things calmly, absorbing adversity and humiliation with the practiced resilience and salty humor inherent in their Irish-Catholic heritage.

Which isn’t to say they’re above a little complaining – and who can blame them? The furniture has not arrived. The light bulbs stay on. Loud, jarring noises interrupt the holiday chatter, some coming from an upstairs apartment, others from a particularly noisy trash compactor. (Skip Lievsay covered the remarkable sound design.) Blurred, inscrutable shapes float in the euphemistically described “courtyard” beneath those tiny, dirty windows, drawing Erik’s attention as he stands in the only corner of the apartment with a Wi-Fi signal. Is “The Humans” a haunted house movie? Could be; Karam isn’t itching to let go of some good jump scares. But for all the creeping fear he evokes here through sheer formal concentration, the nature of the horror he addresses turns out to be much more difficult to pinpoint.

The dysfunctional holiday-themed family melodrama has a legacy that’s both celebrated and overworked, and the strength of “The Humans” lies in the way it mixes up the formula, leaning away from the soaring voices and jaw-dropping revelations that belong to the genres more by heart gesture. The Blakes aren’t particularly dysfunctional; their affection for each other is palpable, and their moments of humor and disposition serve as a natural bulwark against self-pity. But that makes their collective malaise all the more heartbreaking in its often intensely personal and private manifestations.

Erik’s restless, distracted state does hint at one or two painfully kept secrets, which he tries to cover up with warm claims of religious faith and spicy, mean jokes. Steadfast in her devotion to her husband and children, Deirdre is the family’s battered emotional glue and the sublime Houdyshell – who won a Tony for her performance and is the only member of the play’s original cast to make the transition to the screen. – is rarely more touching than expressing her gratitude for a touch of kindness or (more often) taking the blow of a thoughtless, biting comment.

Both Erik and Deirdre, who have had the same office job for decades, are dealing with tough economic times and diminished opportunities. But “The Humans,” first performed Off-Broadway in 2015 and transferred to Broadway in 2016, is neither an overtly political play nor a salve for the pain of the white working class. There are stray references to specific events: Brigid and Richard’s apartment in Chinatown is in a flood plain not far from Ground Zero, which more than once evokes the grim specter of 9/11 and the uniquely harrowing experience of that day for the family. . But Erik and Deirdre are most haunted by something parents of all generations or backgrounds have in common, which is the fear that their children will grow up to be no more happy or fulfilled than they are.

Aimee, with whom Schumer lives with a painful discharge and no trace of her usual comedic energy, has ulcerative colitis, a condition that has put her legal career aside; she also mourns the end of a long-term relationship with her friend. Her sister, Brigid, played by a warm-hearted, quick-witted Feldstein, may be healthier and happier in love, but her disaffection—financial woes, artistic aspirations that lead nowhere—remains an undeniable thorn in the side.

For very different reasons, the grandmother and friend are somewhat outwardly in, although both still make their presence felt acutely and their company is much appreciated. Richard van Yeun responds to almost everyone with sensitivity and kindness, as well as a level of emotional vulnerability that quietly challenges Erik’s traditional male stoicism. (He’s also the one who unconsciously, horribly, explains the meaning of the title.) And Squibb’s Momo, who has Alzheimer’s disease, poignantly expresses the best and worst of her experience, showing us how moments of clarity fighting for dominance amid a haze of misunderstanding and pain.

Momo offers each of her relatives a glimpse of the fate, more existential than medical, that may lie ahead for all of them: a state of utter loneliness, a state that comes not from a lack of love, but from the realization that love may not be enough. Erik has seen it too; it invades his darkest dreams, some of which he has shared with his family. And it manifests itself in the walls of darkness, penetrated only by the light of an LED lamp or an open door, which sometimes engulfs the screen and threatens to swallow it entirely.

In some ways, the deep, haunting pathos of “The Humans” emerged more organically on stage. The split-level set kept the actors in excellent balance; the sense of a tragic premonition seemed to well up from the characters themselves. The sound and light effects felt more appealing in their impact. I will also confess that I miss the special power of Reed Birney’s performance as Erik; Amazing as he is, Jenkins doesn’t quite match the heartbreaking impact of his stage predecessor. Karam has made an impressive reserve feature film debut and has proven himself to be a capable adapter of his own material. But his access to the more demonstrative means of cinema – a dynamic orchestral score by Nico Muhly, an ability to direct the viewer’s attention and zoom in and out at will – sometimes goes against our desire to make this family and its participants very to see.

At the same time, he knows how to use the fragmentation of the screen to his advantage. Initially, he and his cinematographer, Lol Crawley (“Vox Lux,” “45 Years”) filmed the actors from a distance, using walls and doorways to segment the frame; Nick Houy’s sharp editing places the characters further into their separate spaces. But as the film progresses, along with the Blakes himself, it seems to find a more cohesive rhythm and a more cohesive rhythm. The shots get longer with the shadows. Feeling liberated, the camera achieves a hard-won sense of belonging as it glides around a dining table where a family’s grief can still give way to hope and laughter. Karam is too honest to offer closing palliatives to his characters or his audience. But when he plunges us into darkness here, as resolutely as on stage, he does so with all the more confidence that the lights will come on.

Judgement: R, for some sexual material and language