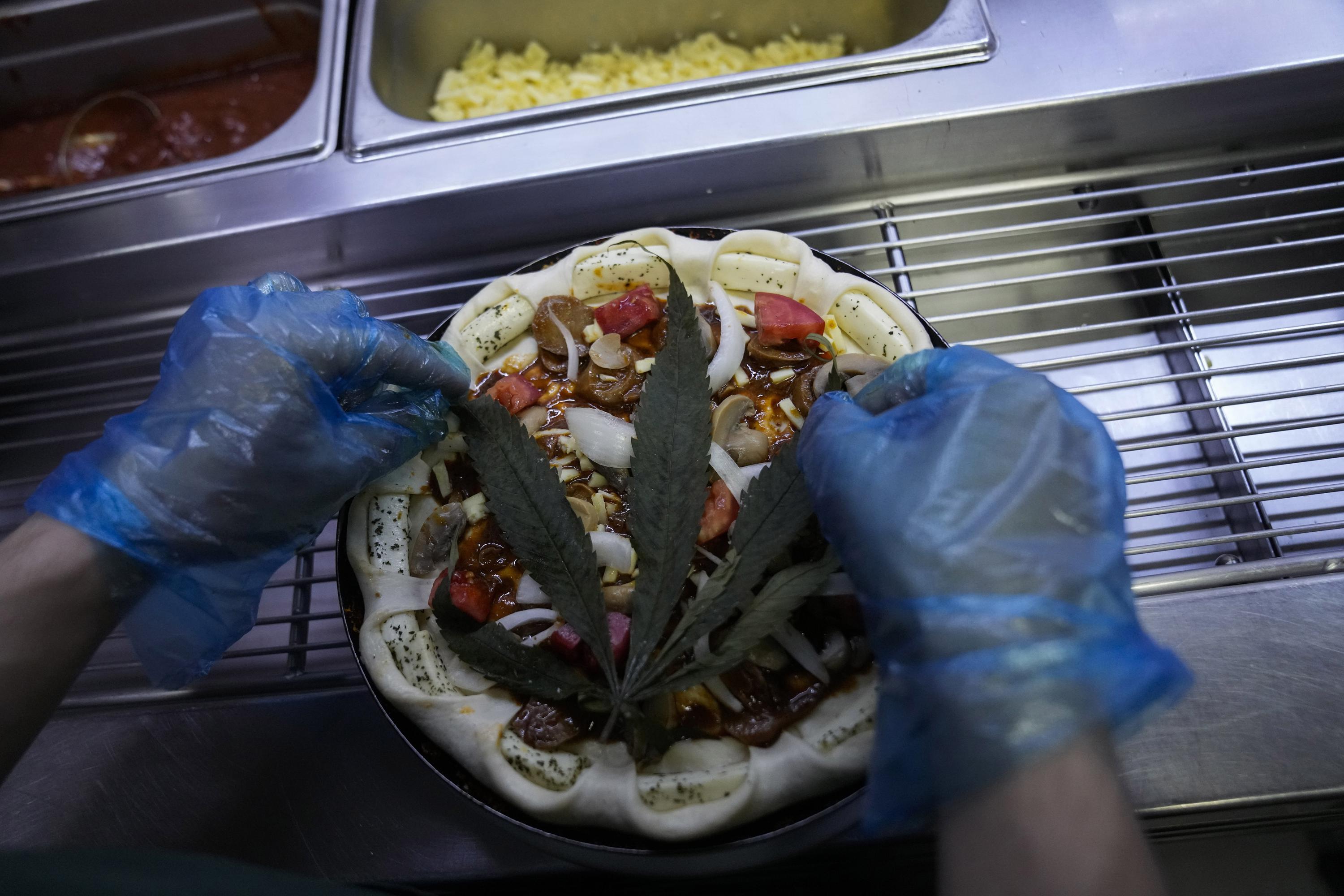 BANGKOK (AP) — One of Thailand’s largest fast food chains is promoting its “Crazy Happy Pizza,” an under-the-radar product with a cannabis leaf on it this month. It’s legal, but it won’t get you high.

Veterans of the backpacker trail, familiar with the legendary pizzerias of the neighboring capital Phnom Penh, which offer potent marijuana as an optional seasoning, may feel downright cheated.

“Of course they can’t get high,” Panusak Suensatboon, general manager of The Pizza Company, said in an interview this week. “It’s just a marketing campaign. and you can taste the cannabis and then when you have enough you might get a little sleepy.”

The Crazy Happy Pizza is a mashup of toppings that evokes the flavors of Thailand’s famous Tom Yum Gai soup, along with a deep-fried cannabis leaf on top. Cannabis is also poured into the cheese crust and there is chopped cannabis in the dipping sauce. A 9 inch cake costs 499 baht (about $15). Customers who prefer a DIY variety can choose their own toppings, with a surcharge of 100 baht ($3) for two or three cannabis leaves.

The cannabis plant has been used for two main purposes: as hemp for making rope and clothing, and as an intoxicating drug known as weed, ganja and dagga.

In recent years, a sort of middle ground has emerged: cannabidiol, or CBD, a chemical found in cannabis that can be made into what has been touted as a miracle cure. CBD can be separated from tetrahydrocannabinol – THC – the chemical in cannabis that produces the high of marijuana.

CBD has legitimized products made with cannabis, based on the mystique of marijuana without breaking the law or raising major health questions. It has become a boom industry, especially in the United States.

Recreational marijuana is still illegal in Thailand and can land you a fine and jail time, even though drug laws have been liberalized in recent years. Cannabis is regulated for medicinal use and individuals are allowed to grow a small number of plants for their own consumption.

Thailand last December became the first country in Southeast Asia to remove specific parts and extracts of cannabis from the list of controlled narcotics, and in February this year its use in foods and beverages was allowed. The amount of THC in the CBD product should not exceed 0.2% of the total weight, virtually eliminating the possibility of getting high.

Cannabis products had become a cottage industry in Thailand even before they were decriminalized, but their adoption by The Pizza Company — operated by Minor Food Group, a subsidiary of the Stock Exchange of Thailand-listed Minor International — is propelling them into the commercial mainstream. time.

Crazy Happy Pizza was available at all of The Pizza Company’s locations in Thailand, but sales were mediocre, according to Panusak. It has dealt with several disabilities – by law it cannot be advertised or sold to anyone under the age of 12. He estimates that when the company ends its sales promotion on Tuesday, it will have to throw away about a fifth of the cannabis leaves it has obtained.

“I don’t think the market is ready for cannabis products yet. We knew that from the start’, says Panusak. “We just wanted to be the first to bring something new and innovative to the market.” He cited durian pizza, which incorporates the exotic and expensive tropical Asian fruit known for its pungent aroma, as another example of his company’s innovations.

“We’re trying to get some new ingredients, anything that’s on trend, and we’re using it and we want people to talk about it,” he said.

Associate professor Wilert Puriwat, dean of Chulalongkorn Business School in Bangkok, believes that using cannabis for marketing can be effective in the early stages, but entrepreneurs need strategies to make it work in the long run.

“In general, people who try it don’t expect to get high,” he said. “They just want to keep themselves trendy and take pictures to post on their social media to show they’ve tried something that was once illegal.”

He said cannabis has an emotional value that builds on a product’s core value. “When people walk into your restaurant, they should come for your food and service, not cannabis.”