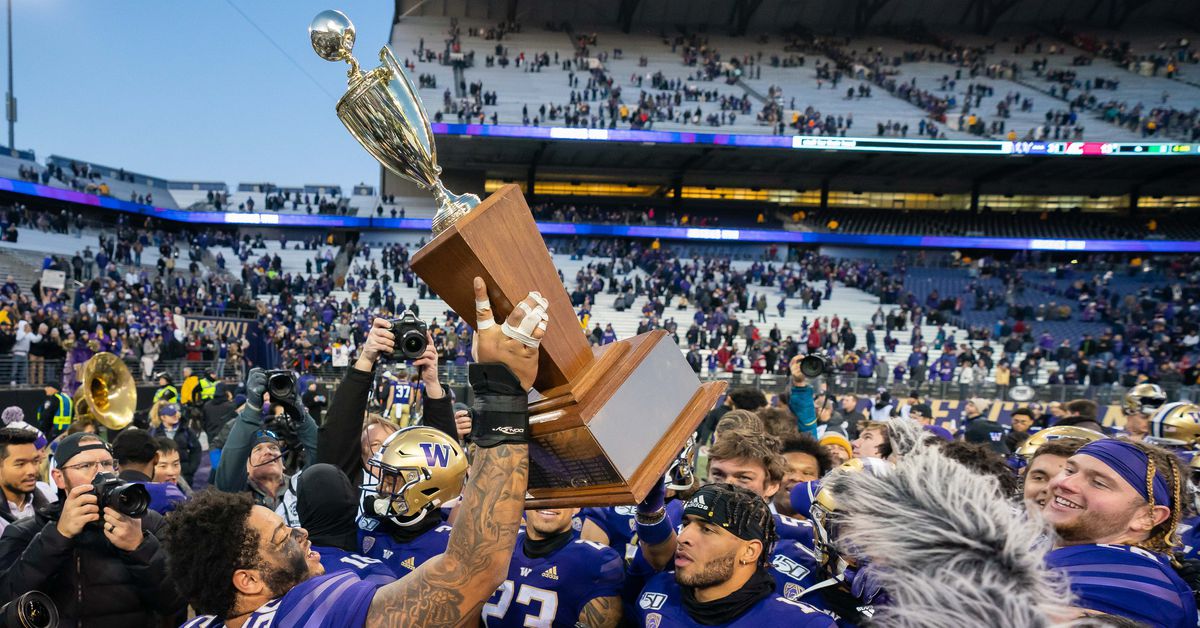 As the season has gone for these two teams, it’s hard to justify a line of bets that assumes the Dawgs are better on a neutral field. The Cougs have already done what the Dawgs mathematically disqualified themselves from qualifying for a bowl game. WSU also has flickering hopes for a Pac-12 North title and a trip to the conference championship. After a slow start, they have won five out of seven and scored 30+ in all five wins. During that stretch, their only losses were to the rock solid teams at BYU and Oregon. The firing of Nick Rolovich appears to have removed a distraction rather than creating a leadership vacuum.

Meanwhile, the Huskies are actually derailed. At 4-4 after back-to-back wins over Arizona and Stanford, it looked like UW still had a chance to finish strong. Instead, Jimmy Lake and John Donovan have been a future venture, Dylan Morris has (probably) lost this hold on the fledgling QB gig, and UW has nothing but pride to play for on Friday.

Washington has dominated the series for the past decade. UW has won seven consecutive and ten out of eleven Apple Cups. Most of those players (and coaches) are long gone, but the element that can have a lasting effect is the match-up of WSU’s offensive system with UW’s defensive system. The Cougars have moved from an Air Raid to a Run and Shoot style after Mike Leach’s departure, but many of the basics remain the same. The QB reads quickly and easily to get the ball to a receiver who can make a play in space. UW’s defense is in fact designed to counter this particular kind of offensive philosophy. The only consistent bright spot this year has been Trent McDuffie and Kyler Gordon covering the receivers, tackling in space and making it extremely difficult to sustain rides through the air. Yes, Max Borghi is a talented runner, but WSU has neither the schedule nor the players to physically dominate up front in the way that has often been UW’s Achilles heel this year.

Will Sam Huard start and play the full game at QB? If he does, will he be able to get the ball to a rapidly improving receiving group, enough for a respectable point total? Any chance of pitting a run game against a rush defense that has had its ups and downs? Inexplicably, I feel quite optimistic this time.

Had UW not failed miserably in protecting the ball last week, the game against Colorado would have ended in a road win for the Dawgs. Could, should, should. But I do think the performance in Boulder was a sign of a team that has been improving every week since the departures of Jimmy Lake and John Donovan. Tomorrow’s game against our rivals in the state may just be the one where the Huskies put it all together.

The biggest uncertainty is who will start at QB. With a significant chunk of the fanbase begging for Sam Huard to get plenty of game time (his absence last week served as a harbinger), it’s hard to predict what the attack will look like when that comes to fruition. I myself would like to see it happen.

The Laura and the passing game are the Cougs’ strong points. After Jayden de Laura claimed sole rights to the QB job, WSU moved from a balanced attack to an attack leaning to the pass in 5 out of 7 games (59% pass, 41% run). But in victories over Arizona and ASU, the WSU offense went 39% pass, 61% run. Will WSU try a similar run-heavy approach against a Husky defense struggling to stop the run? Or, in this season’s edition of the Apple Cup, will we finally see a team trying to compete against the UW secondary (a squad that leads the nation in stats, but starred in “yeah well, nobody’s throwing the Huskies because you can beat them just by running”)? I myself would like to see that happen.

I feel like this UW team is about to put together a complete play on this regime’s swan song – and let’s face it, this is the final step in what was the coda for the Chris Petersen coaching regime. Plus, I think the battle to the end that this Husky team has shown in a season of adversity will give them the mental advantage over the Cougars and lead to an Apple Cup win at the Husky stadium.

Man, I miss the good old days when I didn’t have to worry about this game. Although I wouldn’t exactly call what I’m feeling right now ‘worry’. Of course it would be annoying if the streak ended, but if it ends in a season where we have no hope of a bowl where the head coach and OC have already been fired, I can make peace with that. Which isn’t to say there’s nothing to play for on the Washington side, as I think it’s worth denying the Cougars a chance at a division title.

Before we get to the analysis, I want to commend the Cougar players for the determination they showed to be alive for the North title on the final day of the regular season after the Nick Rolovich saga that played as a easy excuse to collapse. This Wazzu team has a lot of determination and they are going to give it their all tomorrow.

Any prediction for the Huskies this year starts with how Washington’s defense is going to fare. In the Mike Leach era, this wasn’t much of a concern, but the Cougars certainly got the ball running this year. Max Borghi and Deon McIntosh together have 1,254 rushing yards at better than 5 yards per carry each as the primary running back tandem. We may not see Wazzu throw the ball on every down, but there’s no question that it must be effective when they make that choice.

Jayden de Laura is by far the most effective of the QBs Washington State has rolled out this season and he is talented enough to have occasional success, even against Washington’s incredible pass defense. Husky fans in general should still be happy every time he relapses rather than part with it, but expect the Cougars to still get some long pass plays.

Washington’s attack is in flux with the possibility of Sam Huard getting the start now that there are no worries he won’t be able to keep his red shirt. This is certainly not a great Washington state defense, but they are good enough to stop what the Huskies have trotted out as a “violation” for most of the season. There’s always the caveat that if Washington’s offense just didn’t make horrible self-inflicted mistakes I’d feel great about this matchup, but it seems unlikely that will suddenly change in the final game of the season.

The advanced stats generally like Washington a bit, or call it a toss-up. There really isn’t much that could completely surprise me outside of a Wazzu outburst based entirely on a dominant passing effort or a UW outburst where Wazzu is completely incapable of running the ball. There is always some built-in chaos in a rivalry game and that is only added with 2 teams each having their defensive coordinators serving as interim head coaches. Congratulations, Wazu. I’m giving you a small advantage.

Against the spread (YOUR +1): Washington-2, Washington State-1