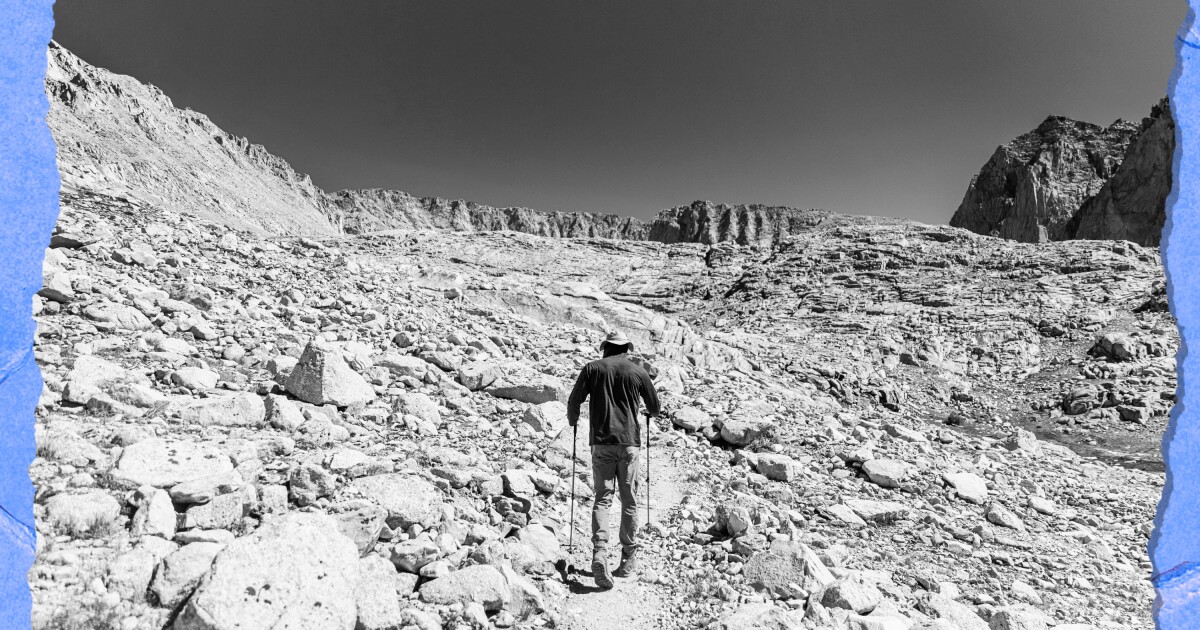 If you share one story this Thanksgiving, let it be this. A few months ago, I wrote about Jack Ryan Greener, a quadriplegic and stroke survivor who taught himself to walk. In August, he hiked to the top of Mount Whitney, the highest point in the contiguous U.S. Now a recently released documentary called “Paralyzed to Peaks” tells his story, step by step, stumbling block by stumbling block. (Stream it here for free.)

His buddy Chase Viken’s documentary takes you from the hospital to the top of the 14,505-foot peak west of Lone Pine, California. In the film, Jack’s anger, frustration, exhaustion and gratitude all converge on the mountain. Introducing the film, Jack recently posted on Instagram: “I’ve really started to shift my vocabulary and thought process to that of loving. Shifting vocabulary from failure to opportunity, a culmination of months after months of mindfulness, meditation and writing. It’s a different life, not the one Jack has chosen, that is being purposefully and deliberately rebuilt. Enjoy, and happy Thanksgiving.

5 things to do this week

1. Yes, Thanksgiving marks the start of the Christmas lights. You should know by now that Thanksgiving is the unofficial start of the Christmas light season, and it’s not just decked out neighborhoods and homes anymore. Local gardens install elaborate light shows (requiring expensive tickets) where you can walk through a compelling backdrop. These are good places to take the family as well as out-of-town visitors. Some examples: Lightscape at the LA County Arboretum & Botanic Garden in Arcadia until January 16; Animal-themed LA Zoo Lights at the Griffith Park Zoo through January 9; South Coast Botanic Garden’s GLOW (Garden Lights & Ocean Waters) in Palos Verdes Estates through January 17; The enchanted light forest of Descanso Gardens in La Cañada Flintridge through January 9; and Sherman Library & Gardens’ Nights of 1000 Lights in Corona del Mar on December 10-12 and December 16-22. Click here for ticket prices and dates for these seasonal events.

2. Snowplay begins after hours in LA County parks. LA County plans to transport 40 tons of snow to city parks to give city kids a winter wonderland glow. Parks After Dark is home to a sledding hill and snow playground, a visit from Santa Claus, a Christmas stocking giveaway (while supplies last) and a hot chocolate station – all free; no registration required. The snow show begins on December 3 at Sorensen Park in Whittier and Pamela Park in Duarte and continues over the weekend until December 18. Sessions run from 12:00 PM to 4:00 PM and 4:00 PM to 8:00 PM. Check the schedule to see the times and dates when the snow falls.

3. Resist the Black Friday shopping spree and #optoutside instead. It’s pretty easy to avoid stores and online shopping the day after Thanksgiving. Plan a hike (here are 50 SoCal hikes to choose from), bike ride, run, ski trip, surf trip, anything that gets you and your loved ones out in nature. You may choose a place you’ve never been before for an adventure full of discoveries. Outdoor retailer REI started #optoutside in 2015 when it closed its 170 stores and sites on Black Friday, encouraging everyone to enjoy the outdoors instead. Then the outdoor cooperative started a cooperative action fund to allocate money to community organizations that “promote justice, equity and belonging in the outdoors to strengthen the health and well-being of people and communities.” Nature awaits. It’s up to you to take the time to explore and share your experiences with your community.

4. It’s time for another car-free spin cycle with CicLAvia. Have you ever wished you could make the streets of LA pedestrianized? Of course you have. CicLAvia does that on a regular basis, so you can bike, roller skate, walk, scooter or run in LA on a traffic-free route (check here for rules about which vehicles are allowed.) to South LA to a route past Martin Luther King Jr. Boulevard from Central Avenue to Crenshaw Boulevard and as far north on Crenshaw as West Exposition Boulevard. The 5.3-mile route is open Sundays from 9 a.m. to 3 p.m. More info here.

5. Join a free tide pool walk on the Palos Verdes Peninsula. Tide pools along the SoCal coast offer a glimpse into another world. At low tide you can discover sea anemones, barnacles, mussels, starfish, snails, crabs and more. Take a walk along the cliffs, then head to the beach to check out tide pools organized by the Palos Verdes Peninsula Land Conservancy. (Boulder hopping makes this a moderate to strenuous trek.) The free walk takes place at 9:00 AM on December 11. Register here to participate.

Sierra Nevada red foxes are one of the rarest high-altitude animals in the forests of Northern California. How rare? They run into the tens. Actually. Conservationists were concerned about the foxes after the Dixie fire burned 963,309 acres in and around Lassen National Forest last summer. But they were encouraged after receiving pings from a radio collar on a 3-year-old fox they named Tule. This LA Times story describes how the foxes survived: “Tule is one of a group of red foxes from the Sierra Nevada that state conservationists began capturing in 2018 and equipping them with satellite collars. Three other collared females at Lassen Volcanic National Park also appear to have survived the fire, which charred about two-thirds of the park. … Less of their habitat was damaged by the Dixie fire, but they continue to use parts that were burned.” Read the full story here.

Wow! What’s it like living alone on top of 11,053-foot Mammoth Mountain? Vincent Valencia knows. For much of the past 18 years, he has overseen the Mammoth Mountain Ski Area gondola operation, which endured “whiteout conditions, wind gusts of 280 mph and temperatures dropping to minus 30 degrees,” wrote Louis Sahagún. from The Times. Valencia, 61, can go five days without seeing anyone else. “A social butterfly will not like this job,” he said. “But I’m not.” Read more about Valencia’s life at the top and his decision to leave that position.

Two Stanford students completed three of America’s toughest trails in record time: the Appalachian, Pacific Crest and Continental Divide. Sammy Potter and Jackson Parell started on New Years Day 2021. They are the youngest known hikers to complete the 7,940 mile journey in one year, known as the Triple Crown of the calendar year. This LA Times story reports: “The first person to report completing the calendar year Triple Crown, Brian Robinson, completed it in 10 months in 2001. Since his inaugural walk 20 years ago, less than a dozen people have followed in his footsteps. stepped.” Potter and Parell used a strategy that involved jumping from trail to trail to rack up miles. Read the full story here.

Send us your opinion

Share everything you think about. The Wild is written for you and delivered to your inbox for free. Message us at TheWild@latimes.com.

Click to view and share the web version of this newsletter, and sign up to have it sent to your inbox every week. I am Mary Forgione, and I write The Wild. I have been exploring trails and open spaces in Southern California for four decades.