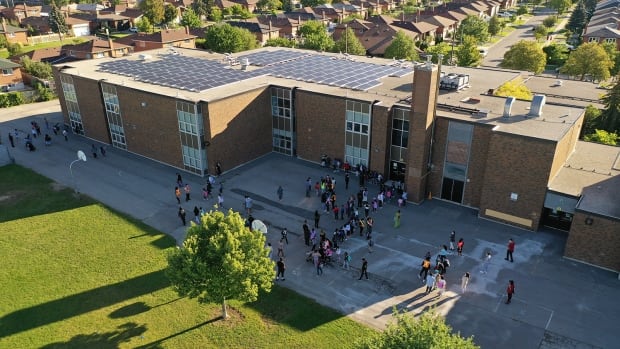 The real estate manager of Canada’s largest school board says part of the answer to the growing $3.7 billion repair backlog lies in the nearly 50 non-instructive properties.

The Toronto Lands Corporation (TLC), which manages the real estate portfolio for the Toronto District School Board (TDSB), says it has a plan to sell and leverage some of those non-educational sites in an effort to potential $1 billion to reinvest in the next ten years.

“Once you do that, you can see how suddenly the TDSB’s deferred maintenance issues are significantly impacted in a positive way.”

Non-instructional sites are board-owned buildings that do not contain TDSB students. They are used for administrative purposes or rented out—many of them to private schools.

The TDSB’s total real estate portfolio is estimated at about $15 billion to $20 billion, according to Sage. The board owns 5,000 acres of land, nearly 600 schools, 36 non-educational or administrative sites, and 11 plots of vacant land. But it still struggles to keep up with much-needed repairs on many of its existing schools.

“The school board is rich in land and poor in money,” Sage said.

The TDSB says the repair backlog could reach nearly $5 billion in the coming years — a problem exacerbated by the pandemic as issues such as air quality in schools became a top priority. The board has determined eight schools that would cost more to fix than to tear down and rebuild, and another 101 that are on the tipping point. The TLC and TDSB chairman say selling and exploiting the non-educational real estate will help, as long as the provincial government can be flexible and cut some red tape.

“We have built our mission and annual plan around the idea of ​​unlocking the potential TDSB has in their country…to actually focus on building exceptional learning spaces for children and the community to enjoy as well,” said Salie .

The TLC’s current focus is on non-instructive locations, which are part of a larger “modernization strategy” that would see schools become community centers through partnerships with different levels of government to keep the buildings public.

For example, a non-educational site could be developed with municipal and provincial partners to create a school complete with community services such as a public library and swimming pool, affordable housing and long-term care beds.

Krista Wylie, a parent and co-founder of the advocacy group Fix Our Schools, says she’s on board with the plan.

“I think the really important delineation for people and politicians to consider is that this infrastructure that we call a school today could be a community center 20 years from now… targeting seniors,” she said.

The TLC’s early pilot projects include downtown Davisville Junior Public School. The new school was a collaboration between the county, the TDSB and the City of Toronto.

The county replaced the school building, the city is responsible for the future community playground and water recreation center, and the TDSB leased a parcel of the property at a nominal rate to the city to build the downtown, which the public can use. In return, students get access to the swimming pool during certain school hours.

Lynne LeBlanc says the old school building was small and the students sat together. She says her two children appreciate the space and natural light in the new school. LeBlanc, who is also co-chair of the Davisville Parent School Council, said the community is delighted that the area will have a hub of facilities for everyone to use.

“Our community is growing exponentially and it is absolutely wanted and needed in our region,” she said.

“You’ll increase engagement. They won’t want to go to another school that’s outside their area,” he said.

In the case of the David and Mary Thomson Collegiate Institute in Scarborough, which was completed in 2019, Sage says the board has cut off tracts of land, part of which was sold to a developer to build homes. The city bought another lot to build a nursery and recreation center. The sale resulted in a $33 million return to the board.

Provincial red tape in the way, says board chairman

So why hasn’t the TDSB built more of these schools by now and helped clear the backlog of repairs?

Sage and Brown point to two main reasons. The first is that the TLC’s mandate was extended just two years ago, which then opened the door for the ideas and planning.

“It allowed us to do assessments and a lot of that work and develop these strategies, which were never considered or never presented to the county,” Sage said.

The second is the red tape. The money the board receives from property sales should go toward existing repairs or updates in schools, not new additions or schools, unless approved by the county, according to the TLC.

“We still need approval for every cent we use of that money, even though we as the board are the ones who put it in the pot,” Brown said.

He also says he wants more flexibility when approving projects, which can take several years.

There is also a moratorium on closing schools, which the board will not allow to close low-enrollment schools and sell the building, even though it has nearly 60,000 surplus student spaces. Wylie says she doesn’t see the TLC’s plan come to fruition without more flexibility from the county.

“A lot needs to change in the mindset and willingness to work together in a constructive, solution-oriented way within the provincial government,” she said.

Sage says the board isn’t looking for more money from the county, but hopes it will address legislative, regulatory and policy barriers that stand in the way of progress.

At a news conference on Wednesday, Education Secretary Stephen Lecce said the province will spend $565 million building 26 new schools and 20 permanent additions in Ontario. It has not been disclosed how many there will be within the TDSB.

That is part of the county’s larger plan to spend $14 billion over the next ten years to build new schools and childcare facilities and to upgrade and maintain existing schools.

“Students in all regions of Ontario will benefit from these secure, modern learning environments that are digitally connected and fully support their learning needs,” Lecce said Wednesday.

The government also says it is working with school boards to accelerate school construction through a pilot project of modular methods.

“This will make construction more efficient and reduce construction times so students can take advantage of new and updated schools more quickly,” a press release said.