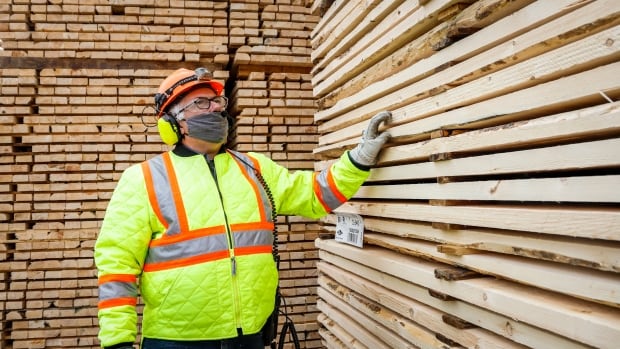 Officials from several Canadian governments and the timber industry are expressing disappointment that the US has decided to go ahead with a plan to double the amount of tax it imposes on softwood imported from Canada.

The U.S. Department of Commerce said on Wednesday it would impose duties averaging 17.9 percent on softwood imported from Canada. That’s more than double the previous rate of 8.99 percent.

In May, the US government said it planned to raise the rate to 18.32 percent, but after further analysis over the summer, the agency decided to lower that plan but still double the levy.

The US says Canadian timber producers are dumping their product in the US at a lower price than US timber companies can do because they are subsidized. So the US is levying a tax on all softwood from Canada to raise the price at the retail level, encouraging consumers to buy US timber.

Canada has long rejected these allegations and several trade tribunals have ruled in Canada’s favour.

“At every step, statements have established that Canada is a fair trading partner,” International Trade Minister Mary Ng said in a press release, expressing how “disappointed” Ottawa was at the decision.

“These unwarranted duties harm Canadian communities, businesses and workers. They are also a burden on American consumers, raising the cost of housing, renovation and rent at a time when housing affordability is already a major concern for many.”

Not all wood has the same job

Canada exports approximately $8 billion worth of softwoods to the world each year, according to official government data. The US is the largest single buyer of it.

Ng says Canada will continue to defend the industry against the unfair tariffs, including through lawsuits under the North American trade agreement CUSMA, its predecessor NAFTA and the World Trade Organization. As late as the summer of 2020, the WTO ruled in Canada’s favor on this issue.

Not all Canadian timber will face the same tax as the US claims that different companies are subsidized at different levels. The final rates are as follows:

All those rates are slightly lower than what was proposed in May, but a lot higher than the level before that.

The British Columbia Lumber Trade Council says the tariffs make no sense because the US doesn’t produce enough softwood to meet its own demand.

Official data shows that the US produces only enough softwood to meet about 70 percent of its own needs. Pretty much everything else comes from Canada.

“Our strong hope is that U.S. industry will end this decades-long lawsuit and instead work with us to meet the demand for the low-carbon wood products the world wants, including American families,” said council chair Susan Yurkovich.

“Until then, we will continue to vigorously defend our industry against these baseless allegations.”

“Any amount of tariffs is unfairly targeted at our softwood exports and these falling and then rising rates are creating uncertainty on both sides of the border,” he said in a press release.

New Brunswick Prime Minister Blaine Hicks also expressed disappointment at the decision. “We are very disappointed with the decision of the US government to increase these unfair and unjustified tariffs on New Brunswick’s softwood exports,” he said.

The U.S. Lumber Coalition, the lobbying group that represents the industry in the country, welcomed the tariffs, saying in a press release that it “remains open to a new softwood trade deal if and when Canada can demonstrate that it is serious about negotiating for an agreement that compensates for damage caused by Canadian unfair trade to American producers, workers and owners of timber land.

“Until then, the US Lumber Coalition supports continued strong enforcement of US trade laws to address the unfair softwood trade practices in Canada.”

The group says that while it is true that the U.S. has historically not produced enough softwood timber to meet its own demand, that is no longer the case, as U.S. producers have increased capacity in recent years and are now about 3.5 million board-feet wood. coniferous wood every year.

“These increases have more than offset the decline in unfairly traded Canadian imports and are enough lumber to build approximately 1.2 million U.S. single-family homes,” the group says.