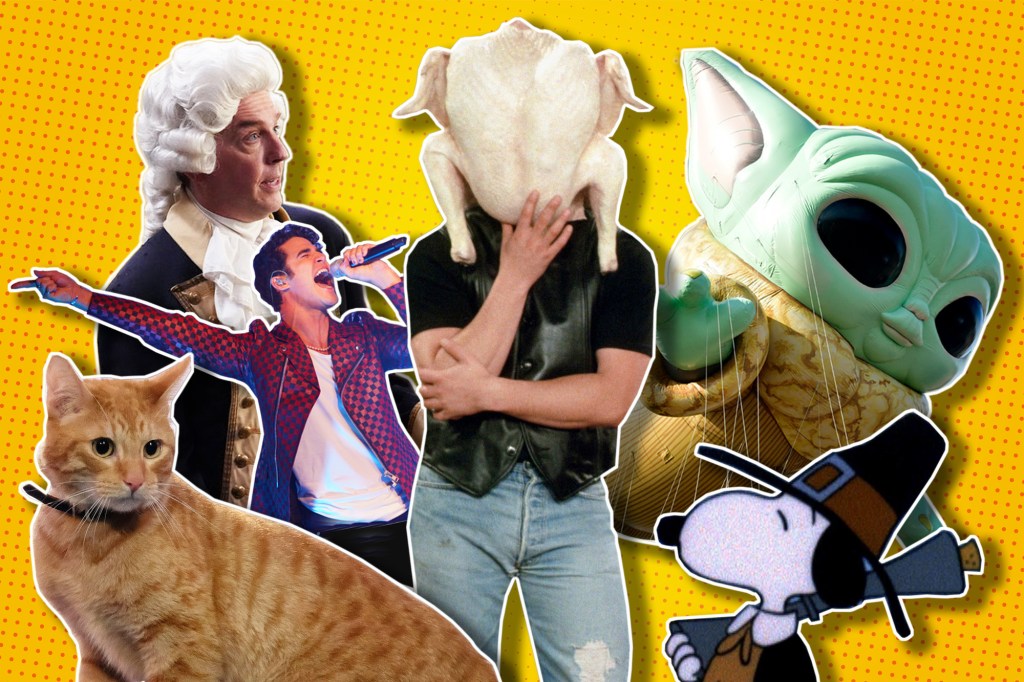 Believe it or not, Thanksgiving is here… again.

Instead of excruciating family feuds over, well, just about anything, why spend Thanksgiving this year watching a good TV show or tuning into a special?

Whether you’re having a family event with young children or a more mature Friendsgiving affair, there’s a great range of viewing options for every age range.

Here’s a handy guide to read as you get ready for the Big Day.

In this two-hour special, co-hosted by Erin Andrews and Finesse Mitchell, animal contestants from 20 different countries take part in competitions such as a cat obstacle course or an ‘extreme dog catch’, where each competition is awarded gold, silver and bronze. medals.

Where to watch: Thursdays at 8 p.m. on Fox

Join Charlie Brown, Lucy, Linus and the rest for this classic 1973 special, which includes a Thanksgiving feast, Lucy snatching the football and, of course, Chef Snoopy and his friend Woodstock.

Where to watch: AppleTV+

Where to watch: Thursdays at 9 p.m. on NBC

Of course, there’s a “Friends” marathon, complete with multiple Thanksgiving episodes. These include Season 5’s “The One with All the Thanksgiving”, (yes, this is the one that Joey gets his head in a turkey), Season 4’s “The One with Chandler in a Box” and Season 8’s “The One with the Rumour” starring Jennifer Aniston’s then-husband Brad Pitt, who plays an old classmate who has a vendetta against Rachel.

Thanksgiving is a great time to watch a Native American-themed show with Native people on the cast and crew, and between “Rutherford Falls” and “Reservation Dogs,” TV features more Native people than ever. Created by Mike Schur (“The Good Place”) and starring Ed Helms and Native American actors such as Jana Schmieding and Michael Greyeyes, “Rutherford Falls” is about a colorful cast of characters in a small Northeast town living next to a reserve is located.

Where to watch: Peacock

For a holiday that’s all about food, why not watch experts and celebrities whip up some parties on TV? In case you missed this new reality series, every episode features a celeb guest like Joel McHale or James Van Der Beek sharing a favorite fast food dish as the show’s in-house chefs recreate it with their own spins.

Where to Watch: Thursdays 11 a.m. on TruTV, HBO Max

This 2020 film has an all-star cast that includes Kat Dennings, Aisha Tyler, Malin Akerman, Wanda Sykes, Margaret Cho and Jane Seymour. The plot follows Molly (Akerman) and Abby (Dennings), friends who plan to spend a quiet Thanksgiving together – but, of course, things quickly spiral out of control when more and more guests show up.

Where to watch: Netflix

In this 2019 film, a man returns to his rural hometown for Thanksgiving, where his old high school friends drag him into a soccer game against their urban rival that had been snowed out 15 years earlier.

Where to watch: Hulu

Tiffany Haddish and Ike Barinholtz star together in this 2018 black comedy that follows a couple trying to get through a Thanksgiving holiday without discussing politics with their extended family. To complicate matters further, it is the near future and Americans are being asked to sign a legal document before Black Friday pledging allegiance to the government.

Where to watch: Amazon